We (primarily me) decided to forego the 13 hour bus ride from Arequipa to Cusco and grabbed a morning flight to Cusco. I was nervous because we were going up in altitude. Cusco is 3,400 metres above sea level but we were just flying into Cusco and immediately going to Ollantaytambo which is at 2,800 metres. I really don't want to get altitude sickness again.

At the airport a group of Russian tourists sat across from us in the boarding area as we waited for our 8:30am flight...one was having his morning beer. 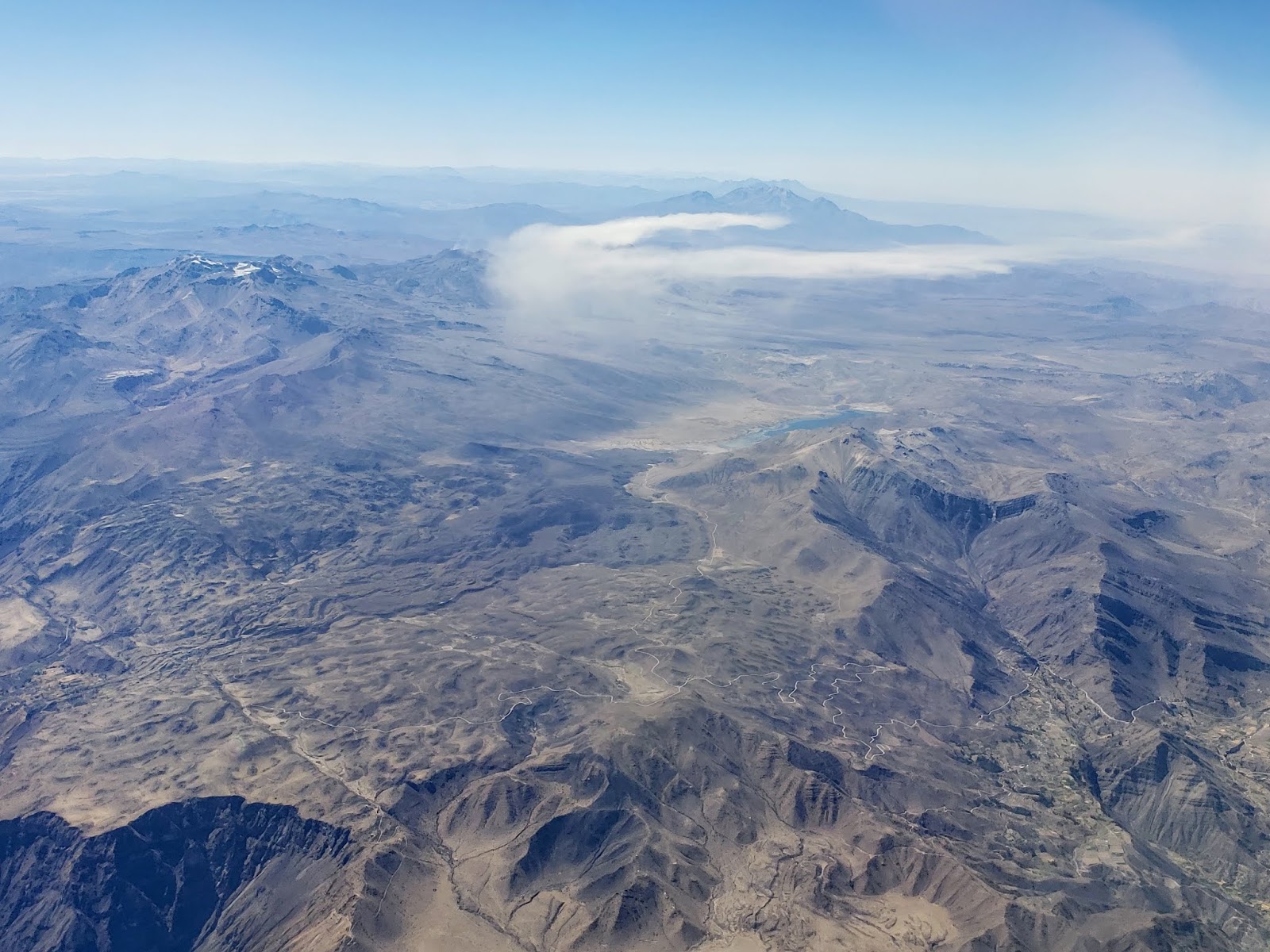 The flight was about an hour. The scenery from the air was impressive.

Our prebooked taxi was waiting for us at the airport to drive us to Ollantaytambo. Once we left the Cusco area and entered the Sacred Valley, we were nestled between high rugged mountains. We would pass fields of corn and other produce. At one point I saw a man plowing his field with two bulls.

The winding road was quite susceptible to rocks falling onto the road or more serious landslides. Our driver dodged a rock on the road at one point and another section we drove through had recently been subjected to a landslide as it was under construction.

In an hour and a half we arrived in the town of Ollantaytambo. Our driver stopped and said we would have to walk in to our hospijodge as it was in an alleyway off the road and not accessible by car.  Fortunately he hoisted my heavy suitcase over his shoulder and quickly walked along the cobble stoned path which had a gambling stream running beside it. I could hear John huffing and puffing behind me dragging his bag (John has had a luggage malfunction which I will explain in another blog). 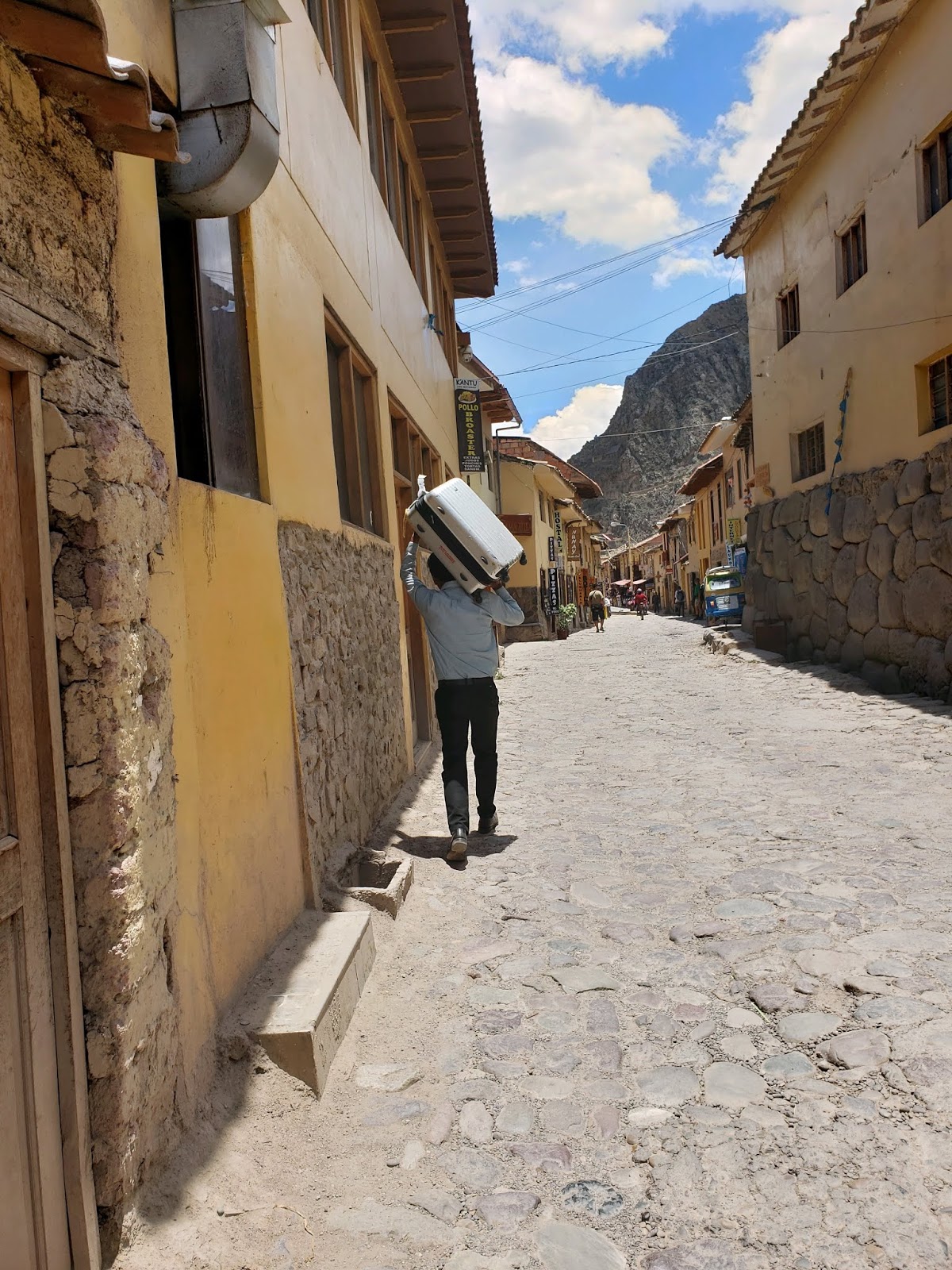 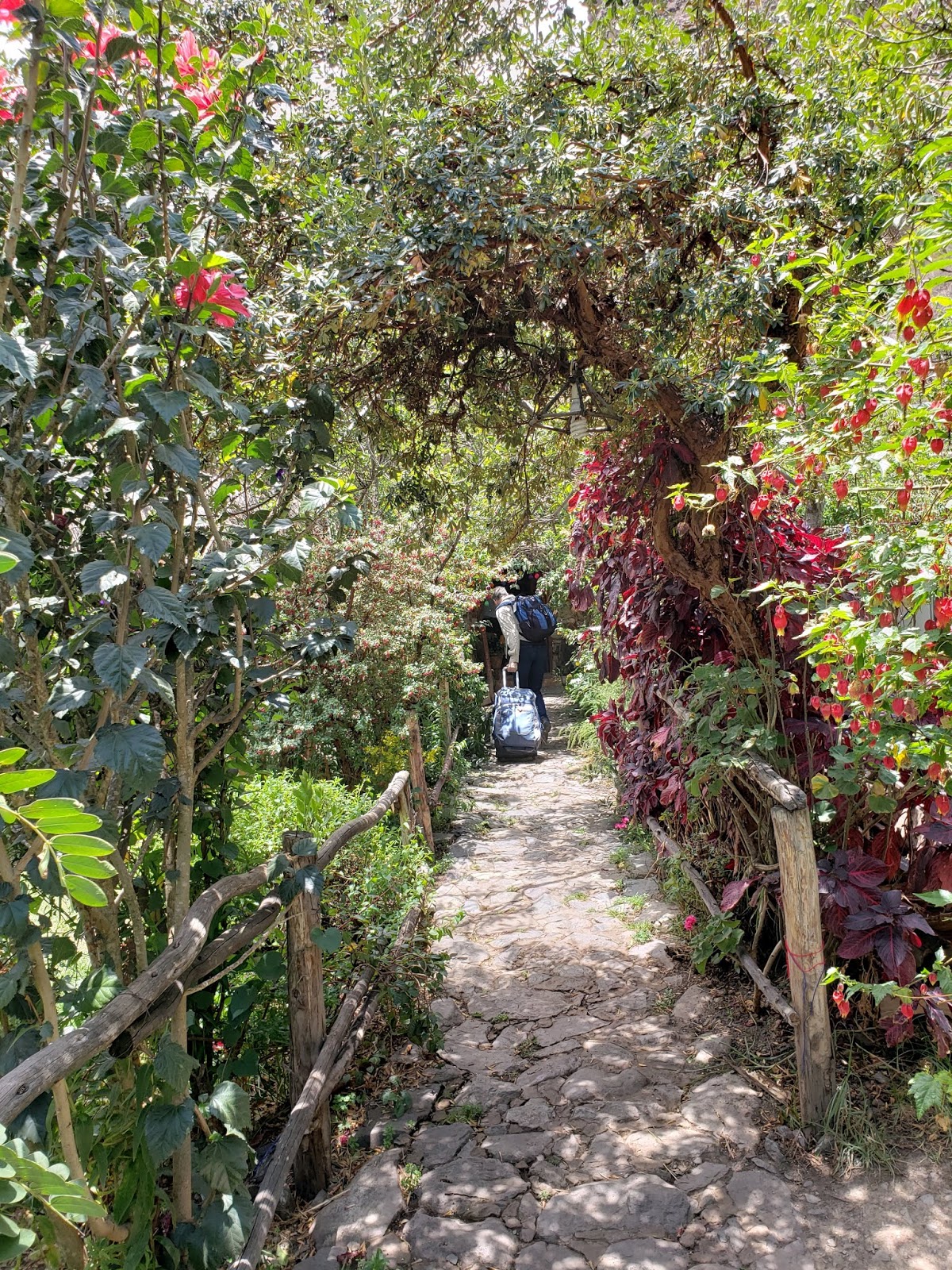 The street and our accomodations were rustic and totally charming. The family lives here, has a cute outdoor restaurant and a few rooms to rent. Our room has two beds, it's own bathroom, is very clean, has wifi and you get to it by walking down a narrow path surrounded by so many different colorful blooms.

After checking in we went to a traditional Peruvian restaurant where I had the rococo relleno (stuffed, slightly spicy peppers that were breaded). It came with purple potatoes and a tomato/red onion salad. It was delicious. John had a really good chicken soup.

Peru is one of the top foodie countries in the world. People will come specifically for the food. I have not had a bad meal yet and I still have so much to try.

After lunch we walked through the town's lively main square and on to the Ollantaytambo Archeological Park...the main attraction. This Inca ruin took my breath away.

Tickets are sold as a package for all the local sites (except Machu Picchu). You have either tickets for four sites to see in two days (70 soles each) or the ticket for ten days to see 16 sites (130 soles each). In the next couple of days we only had time to see this one site so that's the one we got.

You can have a guide take you around as well. They start off by giving you a ridiculous price and then keep giving you lower prices. The more people to split the price the better. We decided to do it alone since I didn't want to be the slowest in the group. 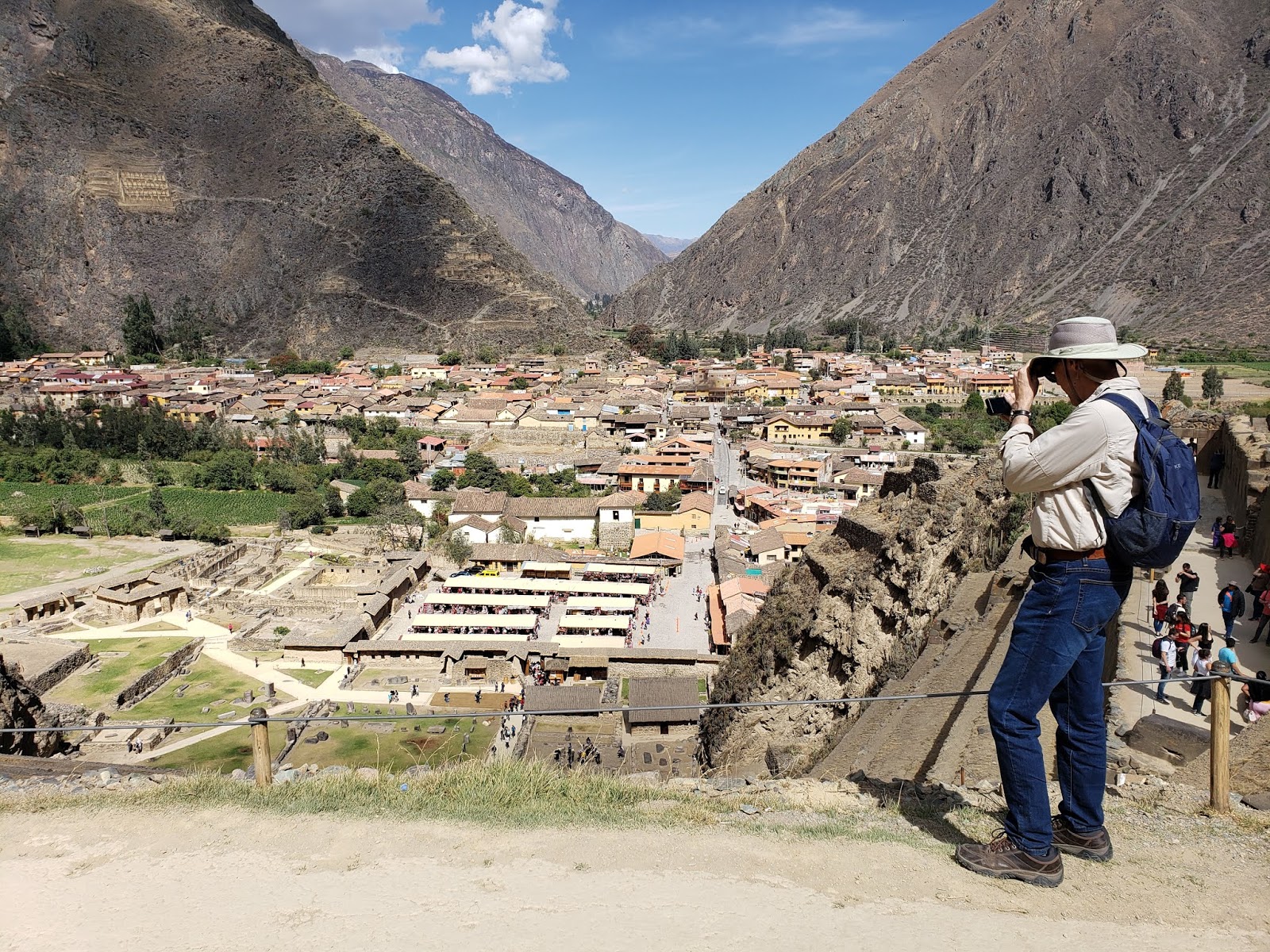 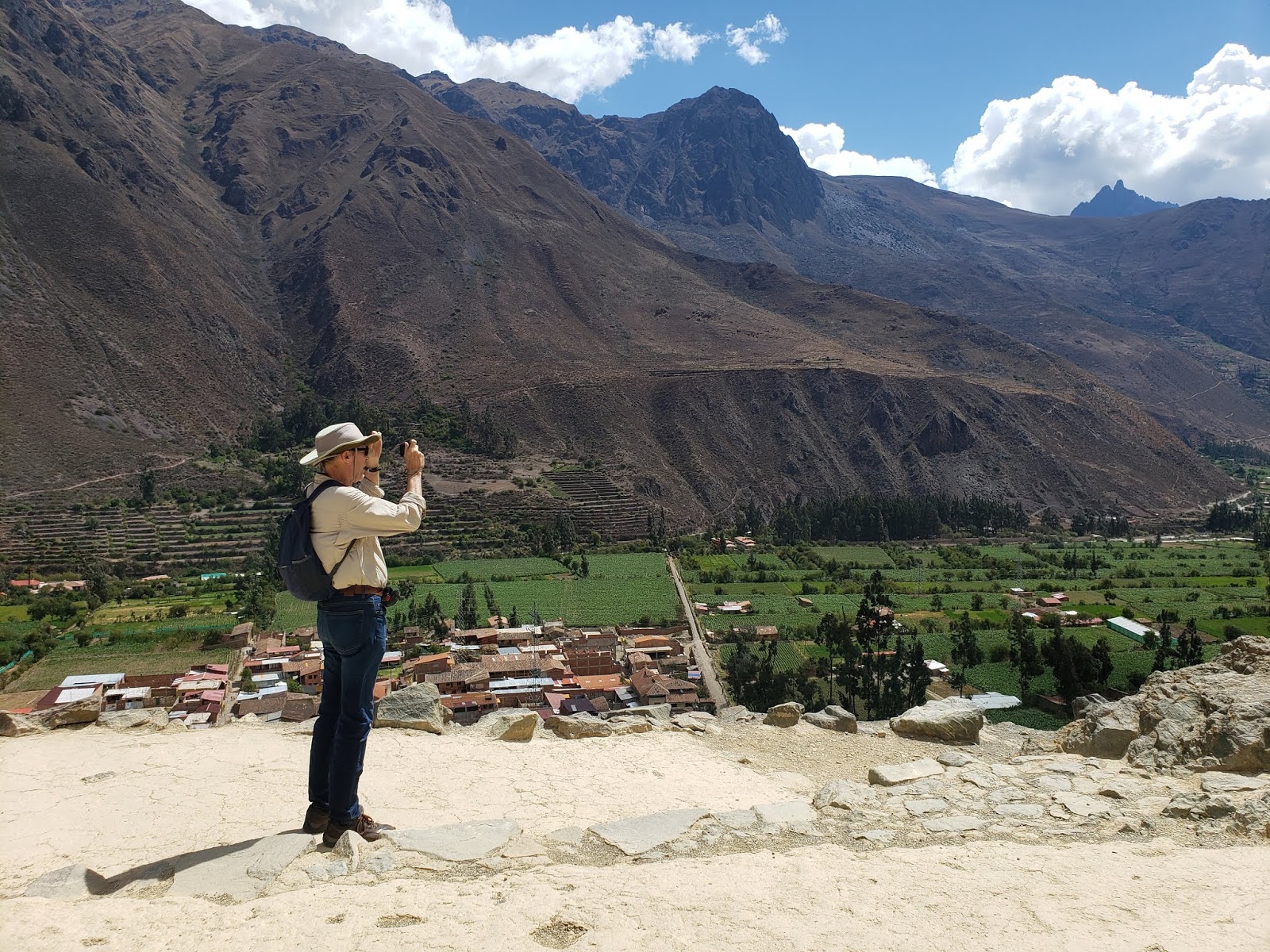 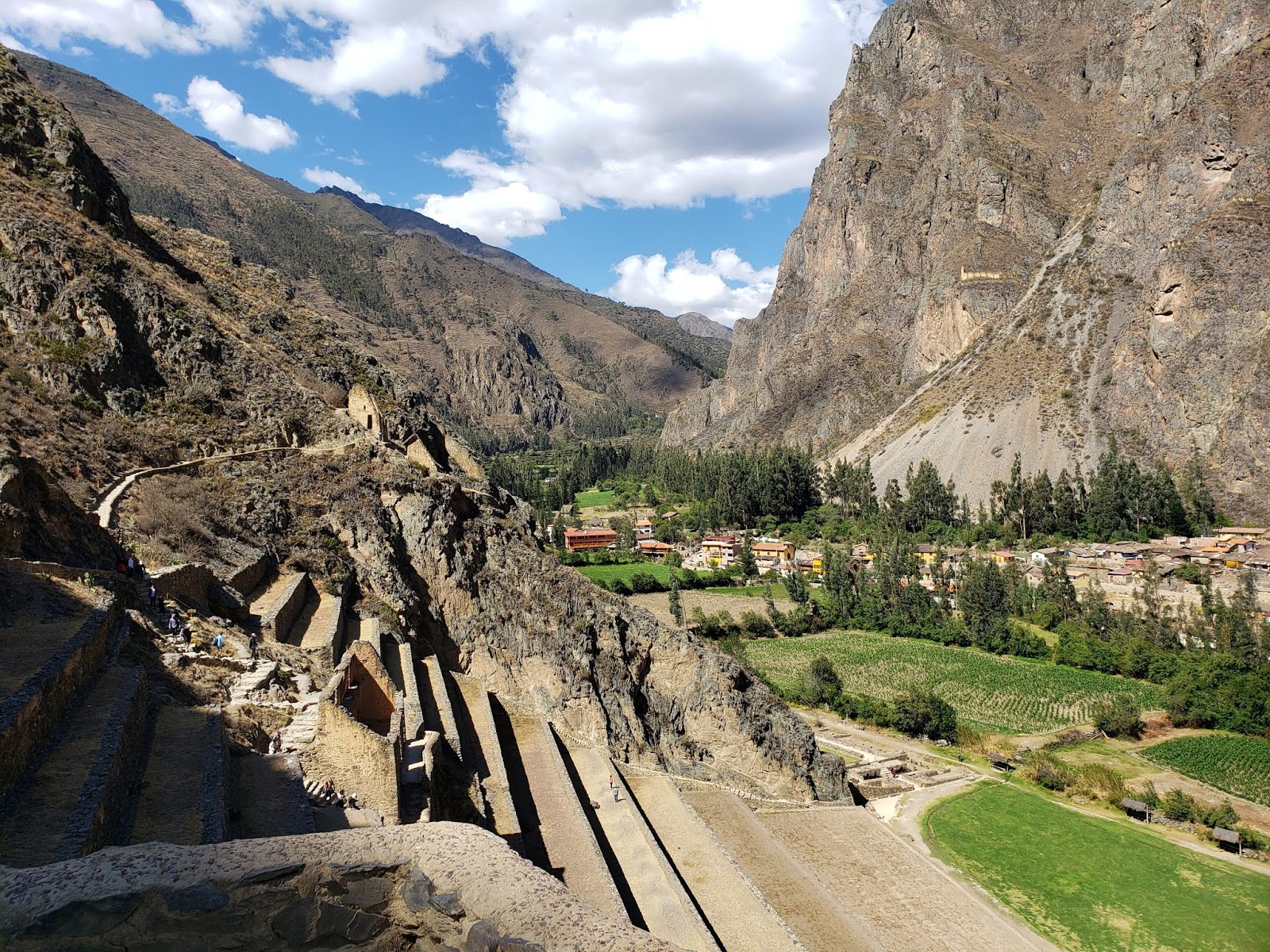 We are so glad we did. We took our time, looked at almost everything and had so much fun. We even made a game of inventing uses for the Incan rooms...who knew the Incas had a Martha Stewart room to store their china and decor items. John's ideas as to what the rooms were used for did not involve dishware. 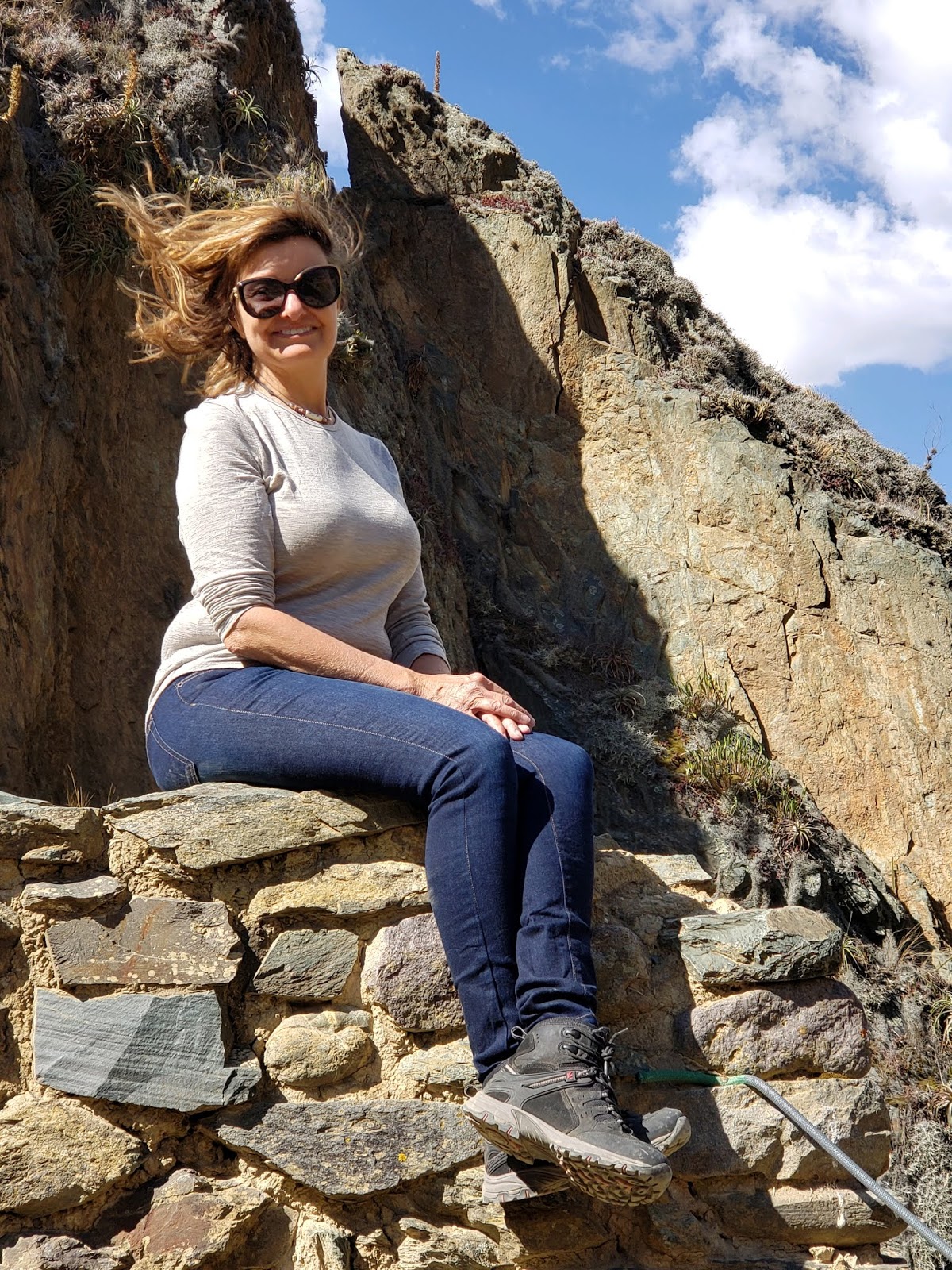 John and I found a ledge to sit on by an ancient house that the guides were not taking people to. We had the place almost to ourselves.

We had the perfect view of the ancient temples below us and the Inca granaries in the mountain across from us. We could see the face of a bearded King beside one of the graineries in that same mountain. 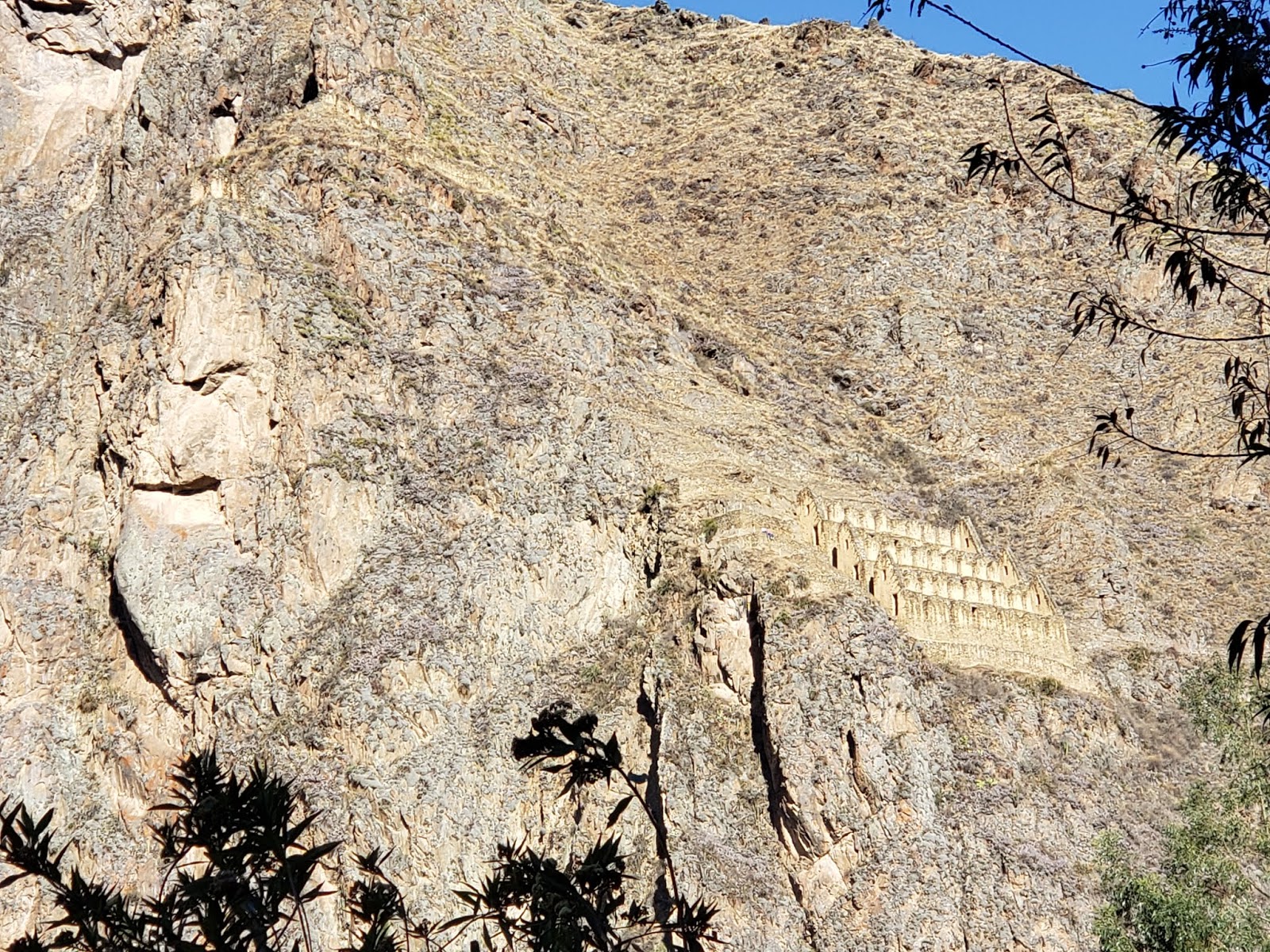 This was one of those iconic trip memories that will stay with me forever.

As we left the site, I could not resist taking some shots of the llamas sunning themselves on the grass near the exit. 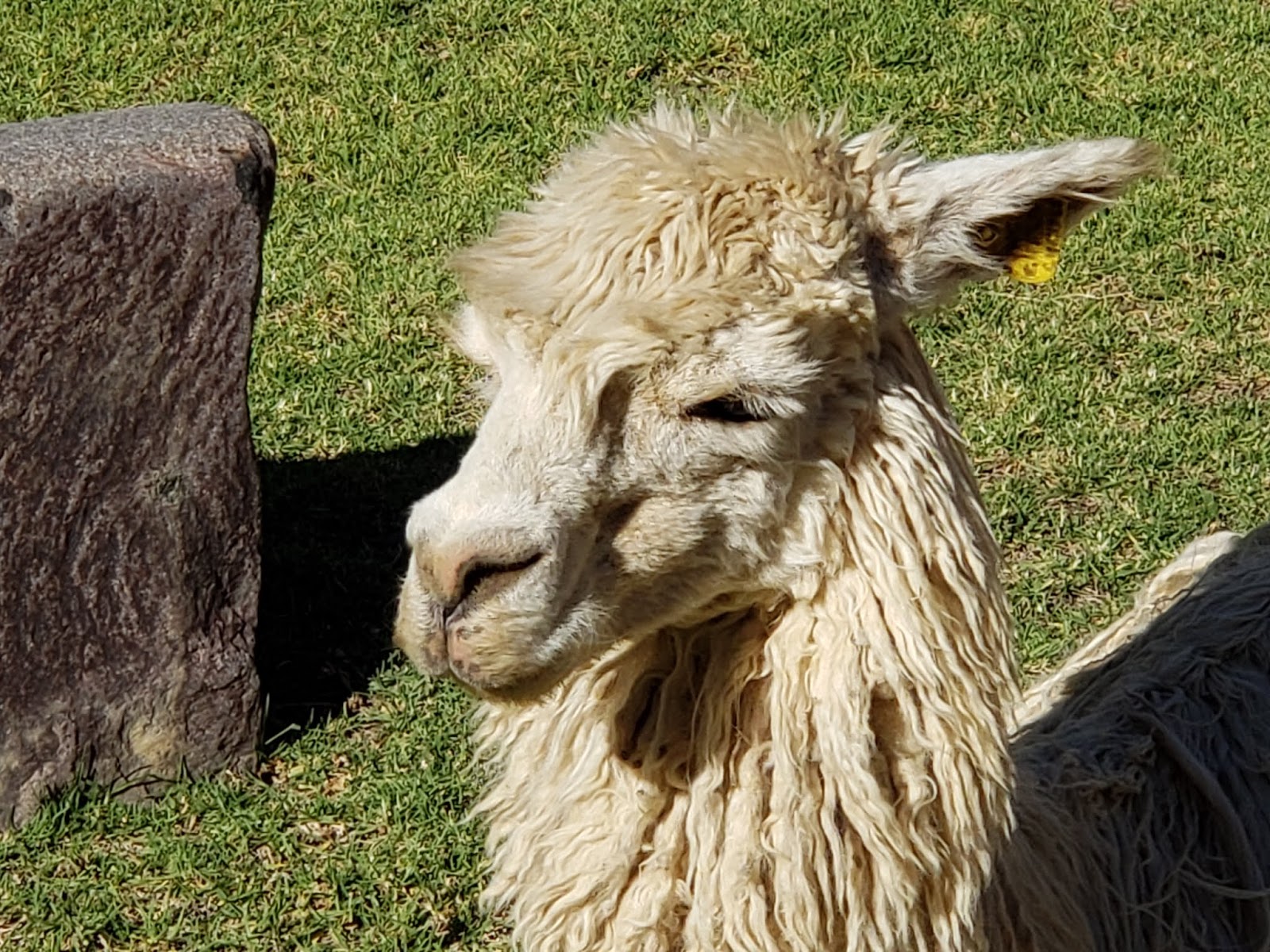 We walked around the local handicraft market before stopping at a restaurant overlooking the main square for drinks....John had a pisco sour and I had a strawberry whip (still staying away from alcohol). It was the perfect spot for people watching. But the main event was a dog fight over a female in heat  in the street below us.

There are many dogs wandering around the town. I cannot tell if people just let their dogs roam on their own or if they are strays. I haven't seen any cats.ĺ

We went back to our hospedaje to clean up for supper and organize our bags for tomorrow's visit to Machu Picchu.

I am feeling fine so far. No altitude sickness which means I should be good tomorrow since Machu Pichu is at 2,200 meters.

We had a delicious supper at Chuspa Restaurant of pumpkin cream soup with cheese (me) and a quinoa with beef and vegetable soup (John). We shared a Quinoa Tabule salad all washed down with a beer (him) and gooseberry lemonade (her).

When we returned to our room, a St Bernard which we had seen in and around town all day was sleeping in front of our door. He didn't move until John accidently dropped the padlock on our door behind him. He then just sauntered off a few feet before dropping back down into a deep sleep. 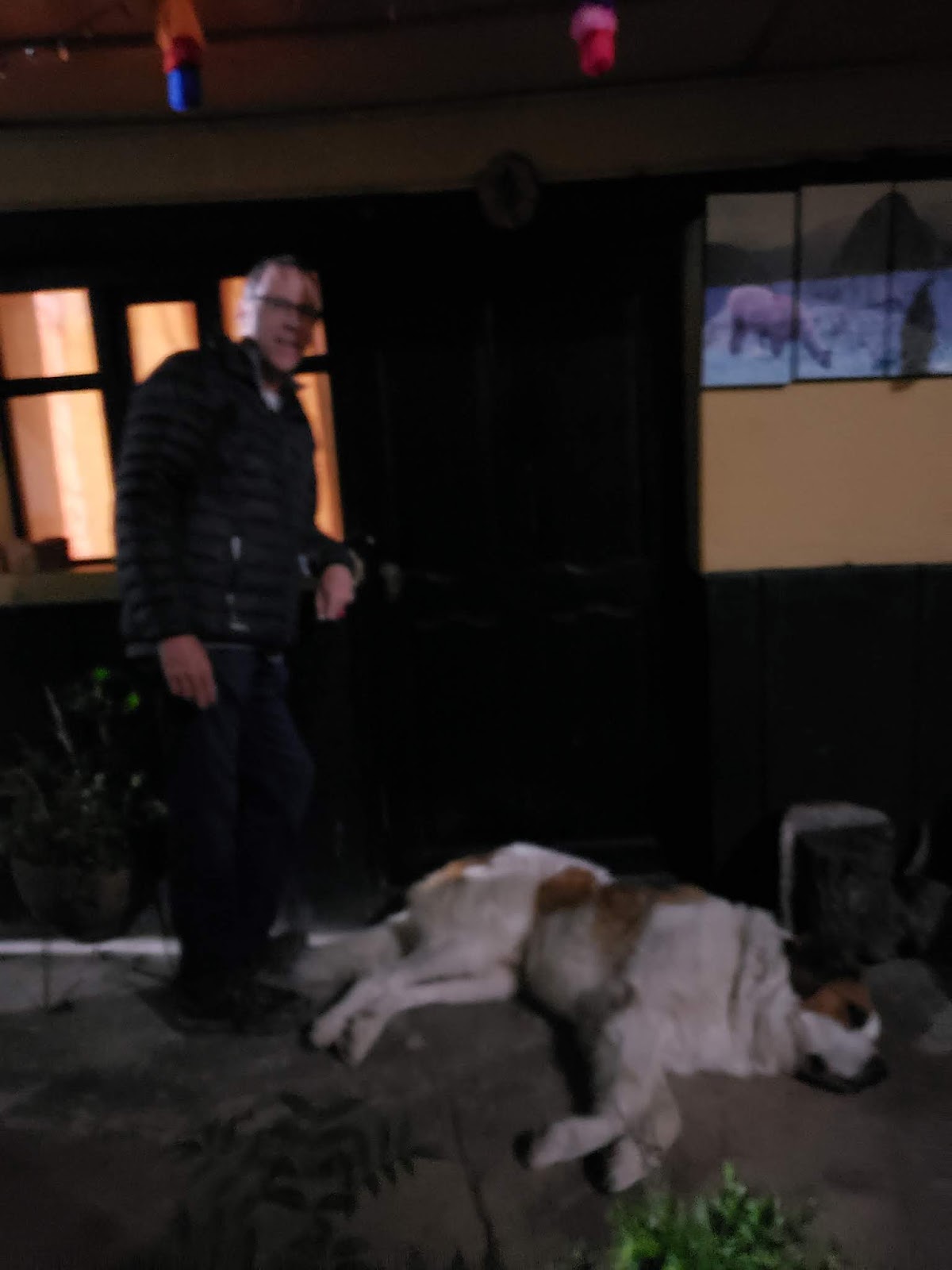 I love this place.

Taxi from Cusco Airport to Ollantaytambo- $37.00 US