Queenston- Ground 0 of the Bruce Trail

At 9:30am, the temperature was a cold -8, feeling like -14 with the wind chill when our group convened in the parking lot at our hike end point in Niagara-on-the-Lake. There were eight of us in the group.

As usual, we left our van at the 7km end point of our hike. We then left Louise and Lance’s car at the Old Firehall Restaurant in St David’s where we planned to stop for lunch and Barry made two trips to get us all to the beginning of the Bruce Trail, Point 0km in Queenston. Organizing the car situation is like planning a small invasion.

The Bruce Trail starts near the Brock monument. We were delighted to see that there were heated washrooms. 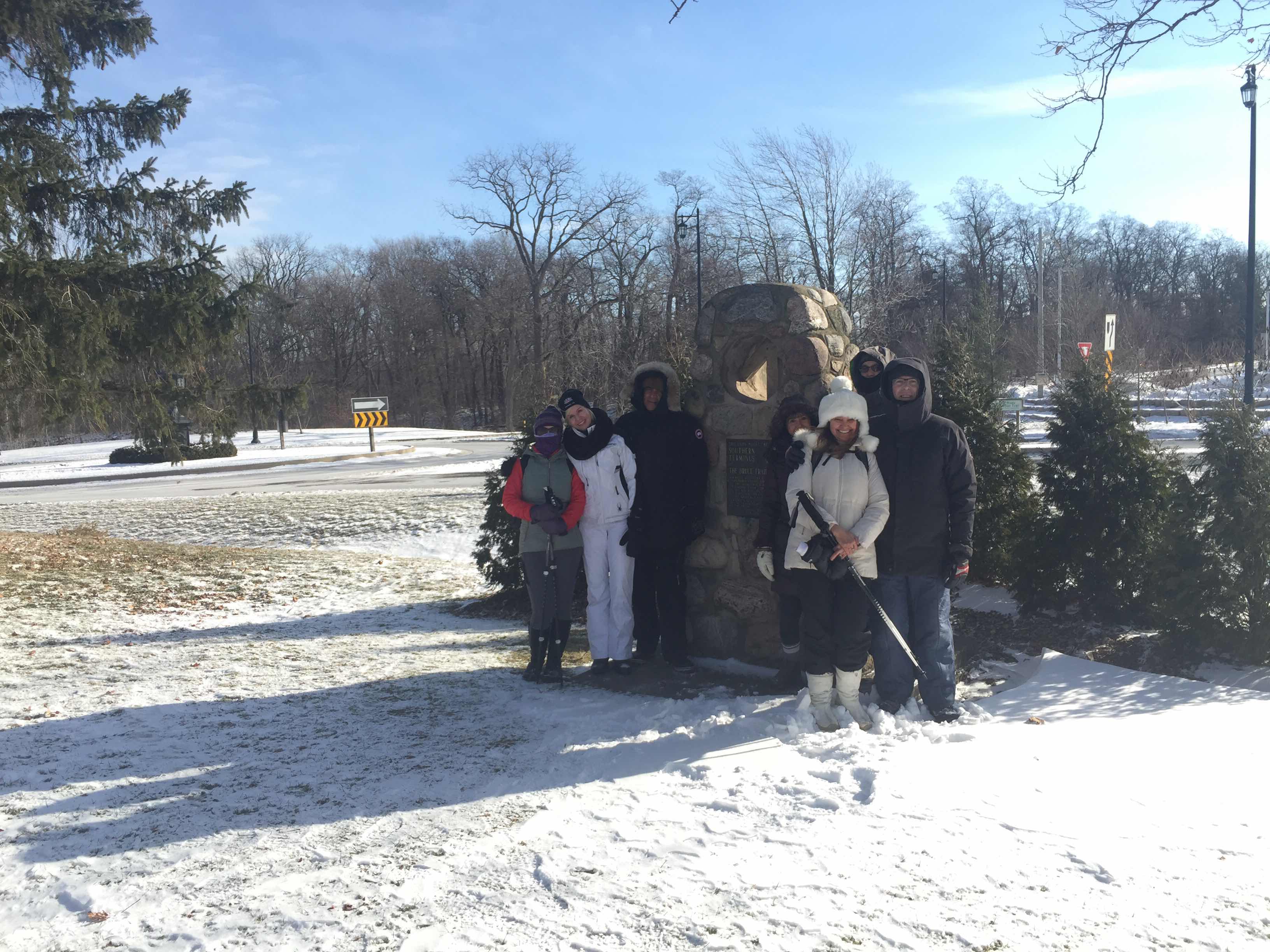 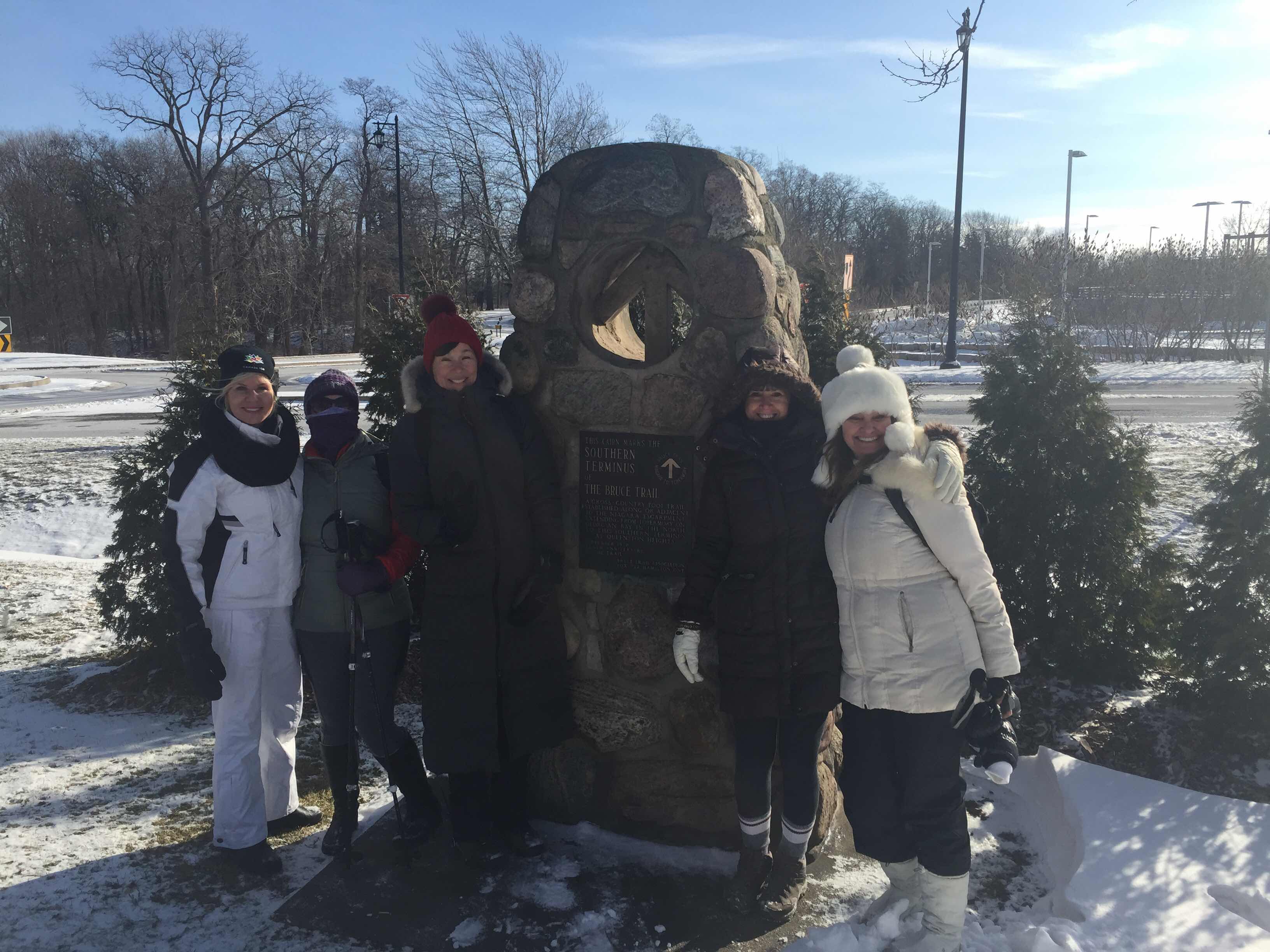 After taking pictures at the Southern Cairn, we began our day’s hike.

Once again we started walking off in the opposite direction, but quickly figured it out and turned around.

Being so cold out, I really layered on the clothing. Soon into our hike I began feeling hot and sweaty.

The trail was well marked with white blazes leading the way. Starting at the top of a bluff, we followed along the old shore of Lake Iroquois (which was the predecessor of Lake Ontario). We walked through woods and passed a quarry. It was icy in parts and quite steep when we had to descend to the old railway bed. Some of us decided to slide down on our butts...graceless but effective.

We left the trail at the 5.3km point to go to the Old Firehall in St David’s for lunch. 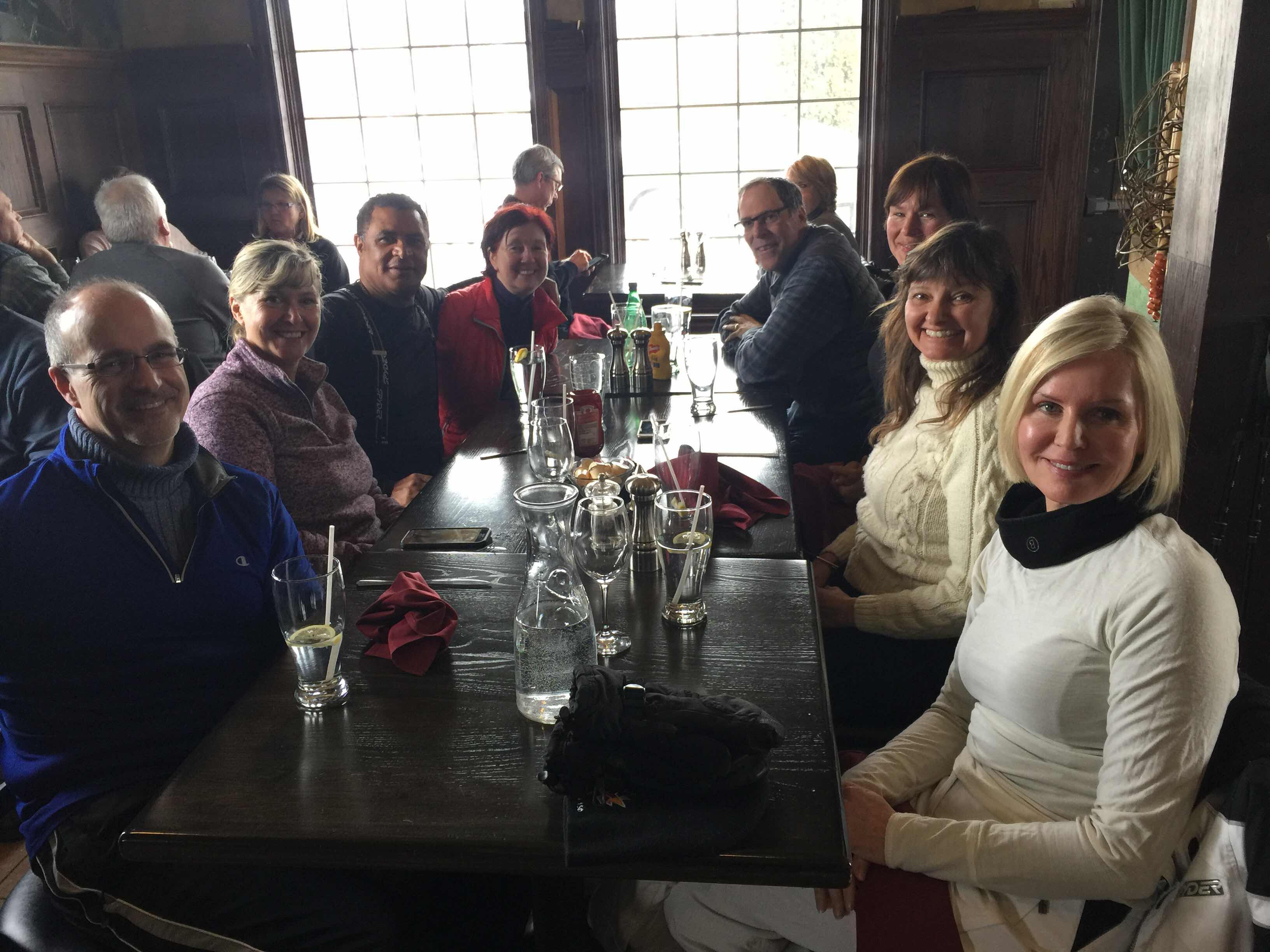 We had reserved in advance, so our table was waiting. By the time we finished lunch it was much later than planned and we were forced to make a difficult choice; finish the last 1.7km of our hike or go for tastings at some nearby wineries.

Lance (whose car was parked at the restaurant) took Barry to pick up his car from the beginning point and we drove to the first winery, Ravine. 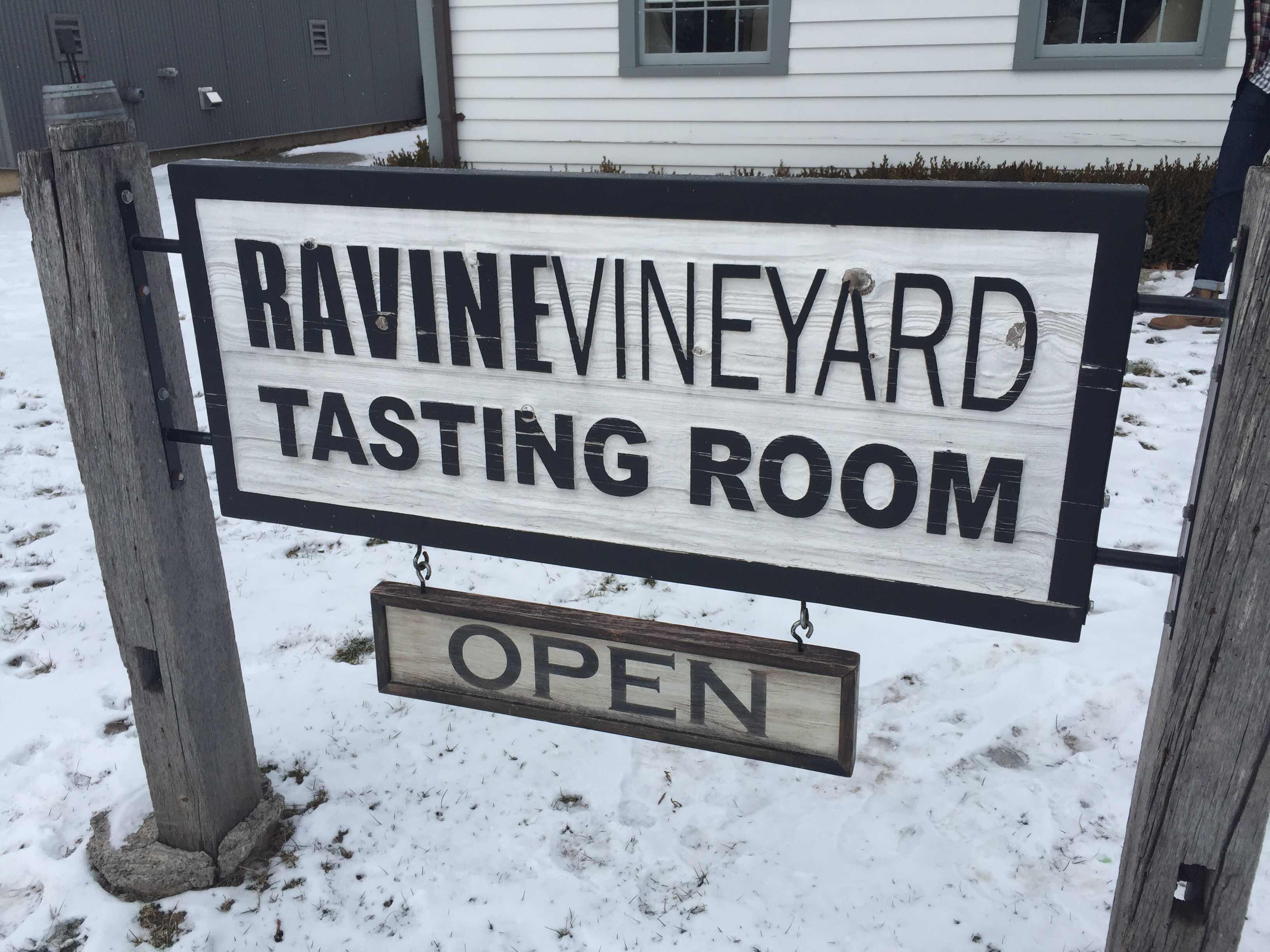 This small winery was delightful. Because we were a larger group, they gave us our own table in the tasting room. It was $10 for a flight of four wines. You got a discount of $4 if you bought one bottle of wine and the whole $10 back if you bought two bottles.

Our wine hostess was very knowledgeable and attentive to our needs and questions. We also checked out their gourmet grocery boutique. 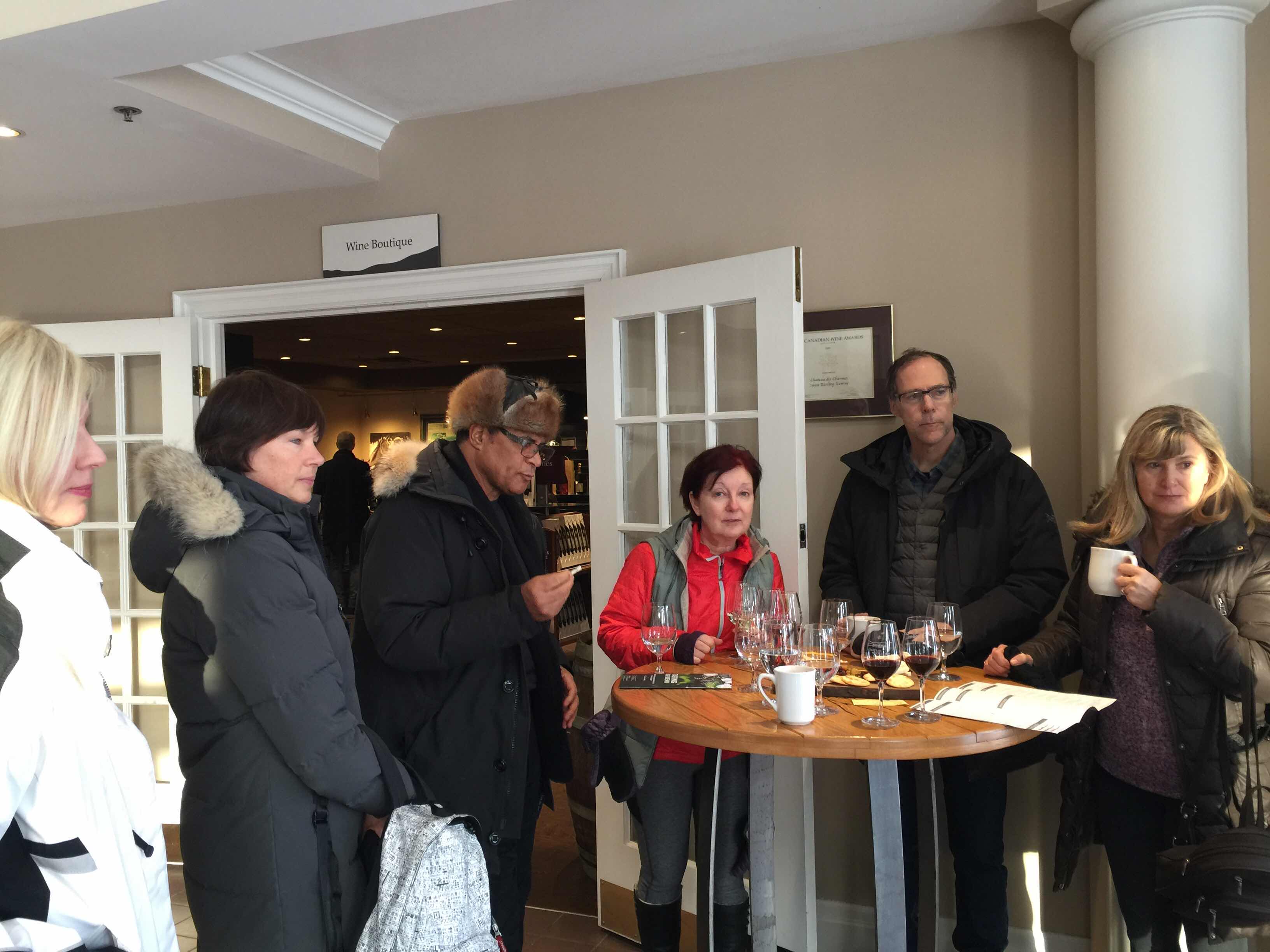 With bottles and food in hand, we piled back into the two cars and headed to Chateau des Charmes. This is the second oldest winery in Niagara. We enjoyed more tastings, a cheese tray and hot chocolate with ice wine infused marshmallows.

Our last stop was to Louise and Lance’s for a delicious chilli dinner paired with Niagara wines.

When we reached home, John relaxed   in front of the tv while I pulled out my mat and began to stretch...waking up on the mat a half hour later, I dragged myself up to bed.

It was unanimous, we all slept like babies that night.