Clown Car on the Wrong Side of the Road 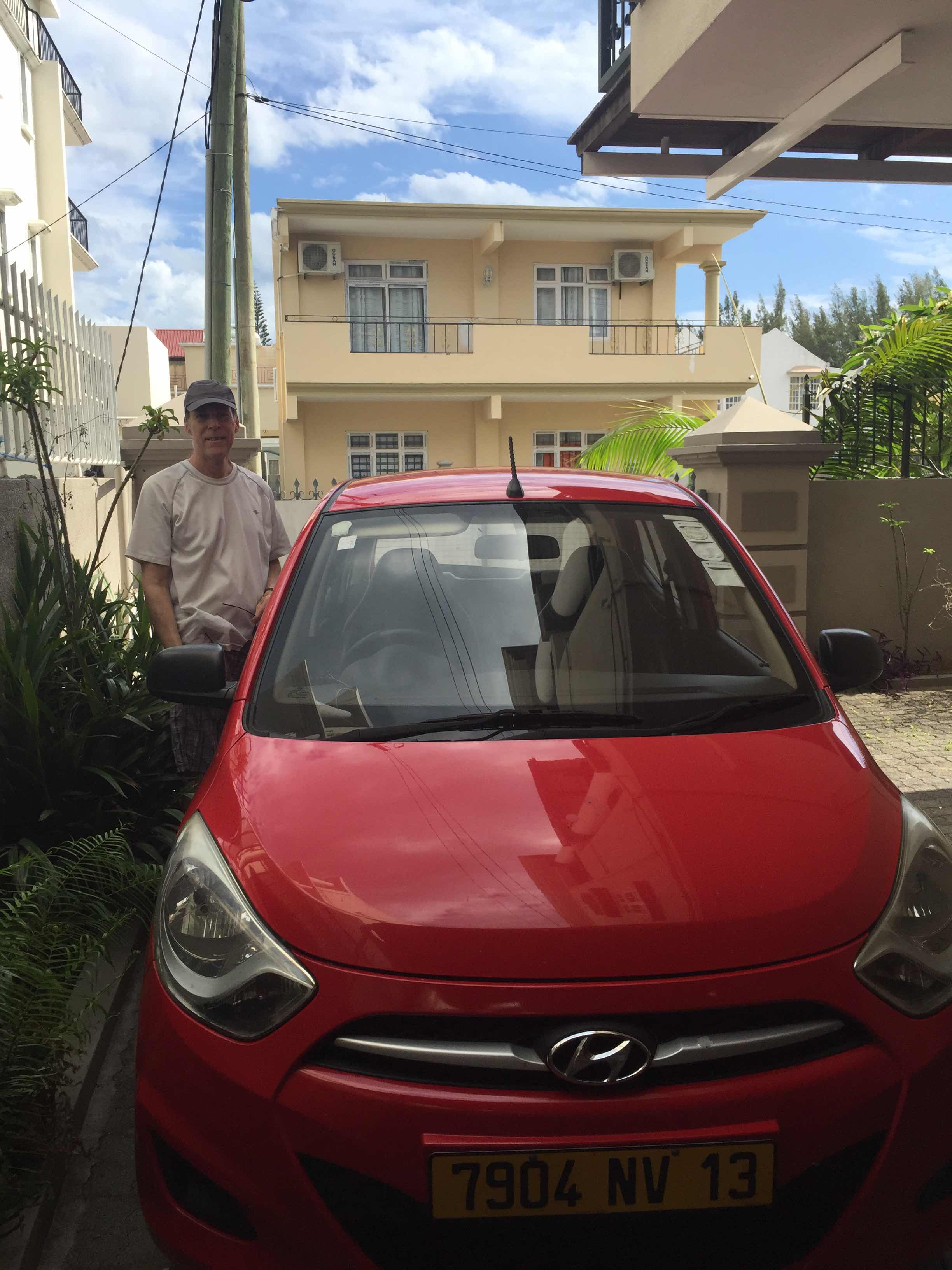 I had no idea where Mauritius was when John first suggested we go, so for those of you who are like me, here’s the scoop. Mauritius is an African country that is a volcanic island in the middle of the Indian Ocean, about 1,132 kms beside Madagascar. It is Africa’s most densely populated country so traffic can get quite busy at times. French is the main language but people also speak English. Most signs are French.

The plan was to arrive in Mauritius at 1:30pm so that it would be light when we did the one hour drive to the town of Flic en Flac which is on the west coast of the island. Unfortunately there was that three and a half hour delay with our flight.

It was 5:30pm by the time we collected our baggage and exited the airport. Our car rental agent was not there to meet us as planned. I got another agent to give him a call and he showed up ten minutes later to inform us that the rental car we had booked was not available because two new eighteen year old employees were driving two rental cars (one of which was ours) to the airport and they decided to race each other and got into an accident. Both cars were totalled and the two employees were in the hospital. He said he couldn’t get us a car until the next evening. We found the story far fetched but on the otherhand it certainly wasn’t a story that portrayed the company in the best light given the many other excuses he could have come up with to explain why they had no car for us.

I went to several rental car booths and negotiated with companies that had a small number of available cars. A German and a Dutch tourist also did some negotiating on our behalf. We actually ended up paying close to what the original rental would have been.

When I saw the way the rental agent whipped the car a few times around the small traffic circle in front of us, (stopping quickly to put right a pylon he had knocked over), I was more inclined to believe the first agent’s accident story.

Our car was tiny, bright red with a few dents and some rips in the upholstery. We didn’t complain because at this point it was dusk and we were desperate to be on our way.

As I watched John fold his tall body into the right hand driver’s seat, the words “clown car” came to mind. 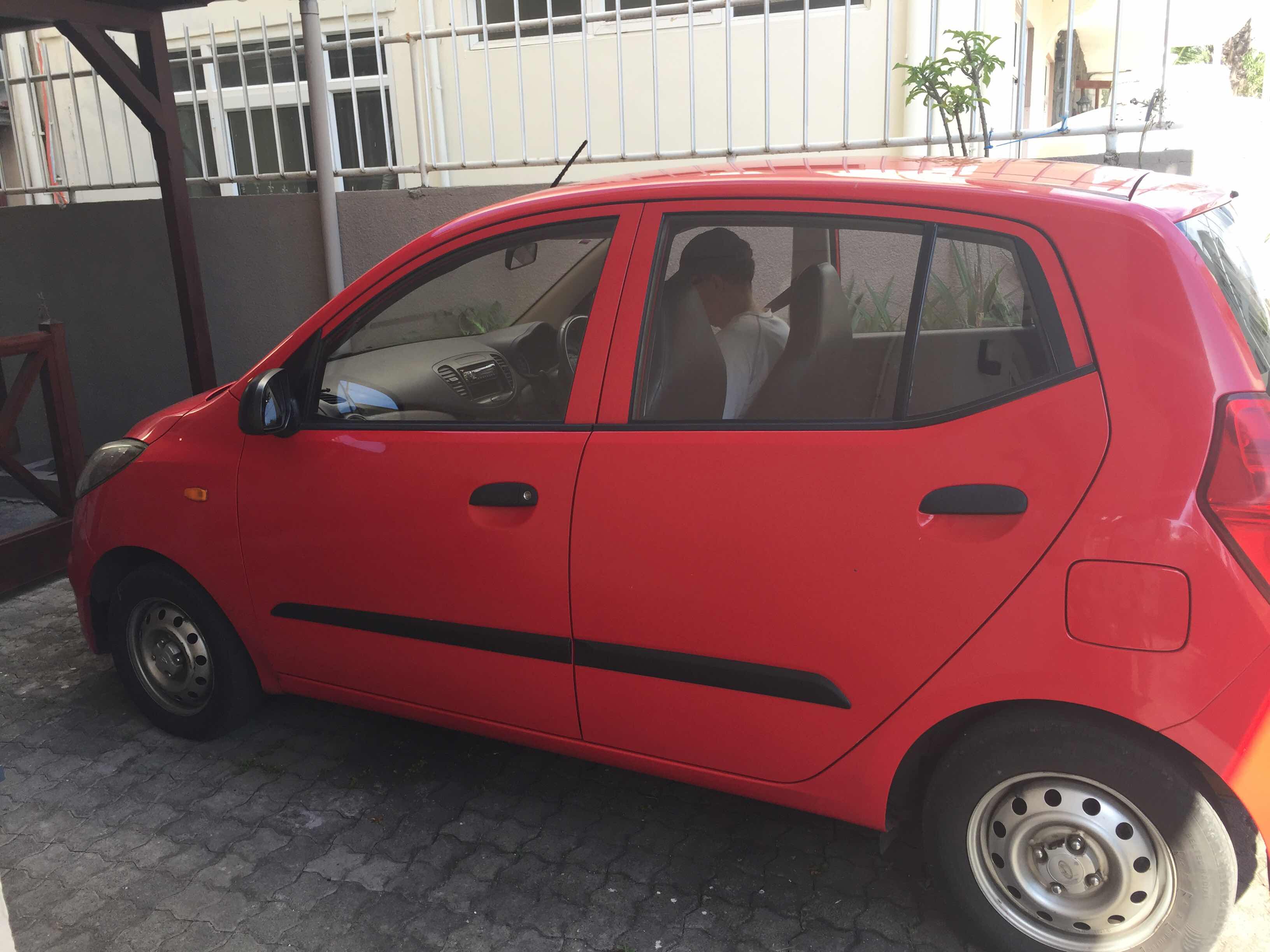 With mild horror, I realized that they drove on the British side of the road here. By this time, dark had fallen and all we had was a map on John’s cellphone  to guide us.

There were a lot of round abouts along the route, not much lighting, minimal road signs and no sidewalks so we had to really watch for pedestrians, stray dogs and bicycles (also with no lights). To make matters worse, John would turn on the windshield wipers every time he went to activate the turn signals as they are in the reverse location beside the steering wheel to what we are familiar with.

The air was warm and tropical but I couldn’t see the scenery, I could only make out outlines of mountains and things that looked like small step pyramids.

Surprisingly, we made it to our destination, only having to back track once. Upon arrival, John looked at me and said, “I never thought I would hear myself say this to you, but you did a good job navigating”.

A friend of the owner met us at the house and helped us park the clown car into the small gated driveway.

Our accommodations were a large two bedroom apartment in a large house, just steps away from the beach. It was clean but had a strange layout. There is a deck off the master bedroom and a second bedroom beside it. Both bedrooms were attached to a long hallway which lead to an entrance and a living room. A closed door in the living room lead to an eat in kitchen.

I was quite concerned when I couldn’t find a bathroom. Eventually John found a door in the living room (which I thought was a closet) lead actually to a full bath.

Like many places in Europe, you use a key to lock the outside doors at night...let’s just hope there isn’t a fire.

We were told that most restaurants close early so we went to a fine dining place along the beach for a light supper and beer. I had the most delicious truffle and mushroom soup that I had ever tasted. John’s Thai chicken skewers were also pretty good.

The bed is comfy but due to time change, it took me awhile to fall asleep.