Our flight was almost 40 minutes late. We had a great view of Toronto in the late evening sun. 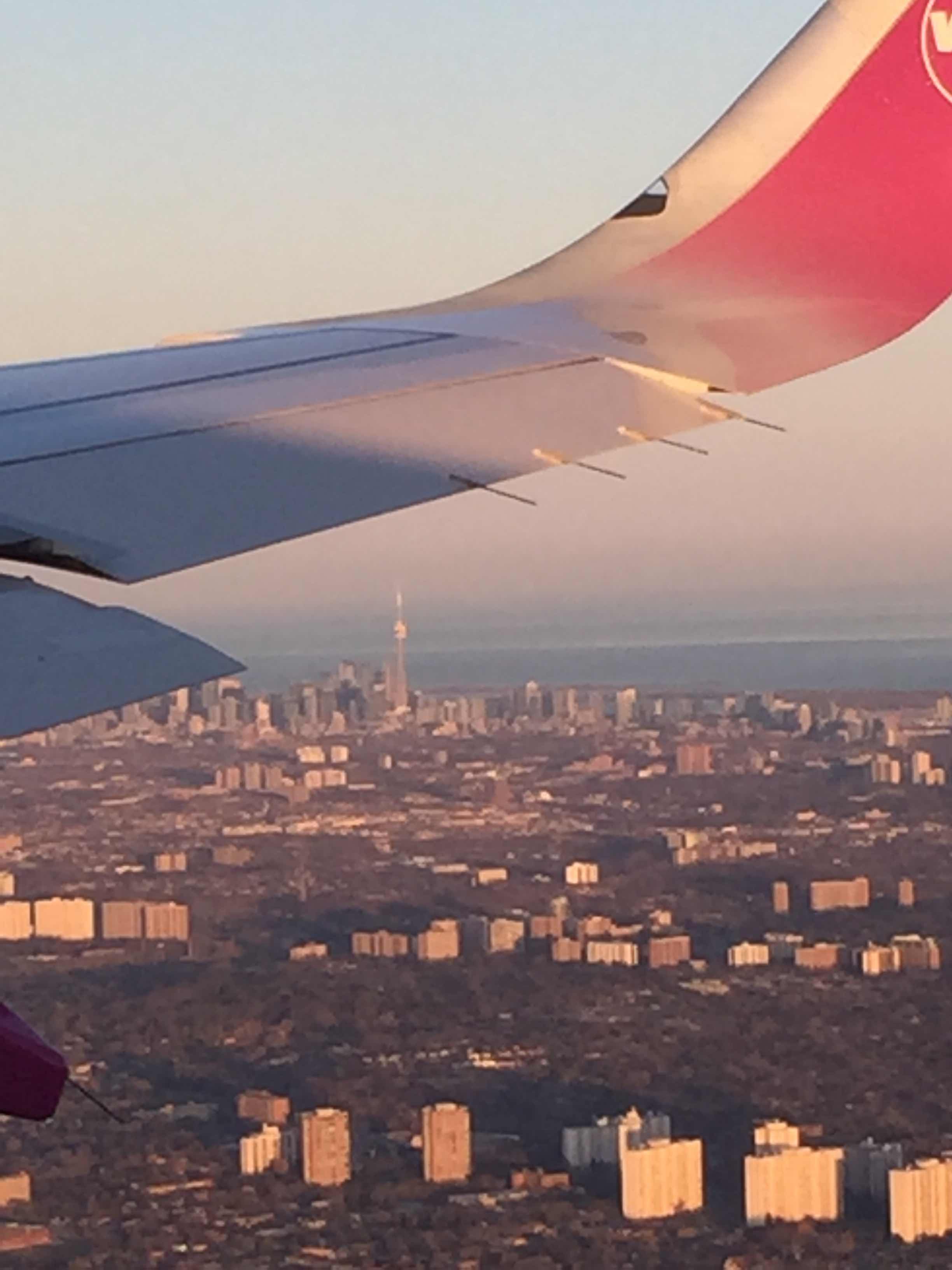 The Wow flights are pretty basic (you don’t even get water) but they got me to where I needed to go. I had no one sitting beside me on either flight which led me to question the effectiveness of my antiperspirant. I slept through both flights. 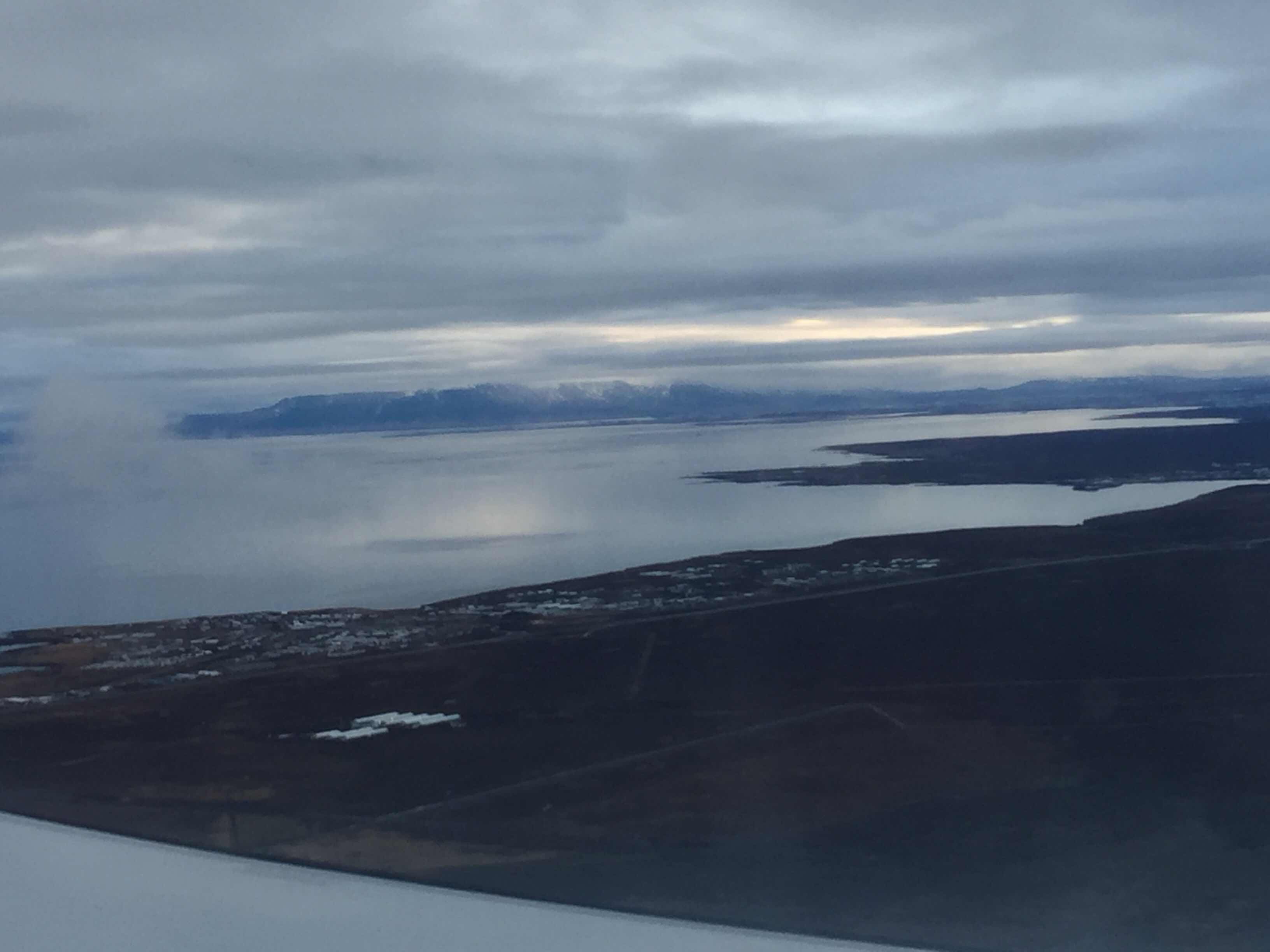 I enjoyed the aerial views of Iceland when we took off and the colour blocked tulip fields near Amsterdam when we were landing. 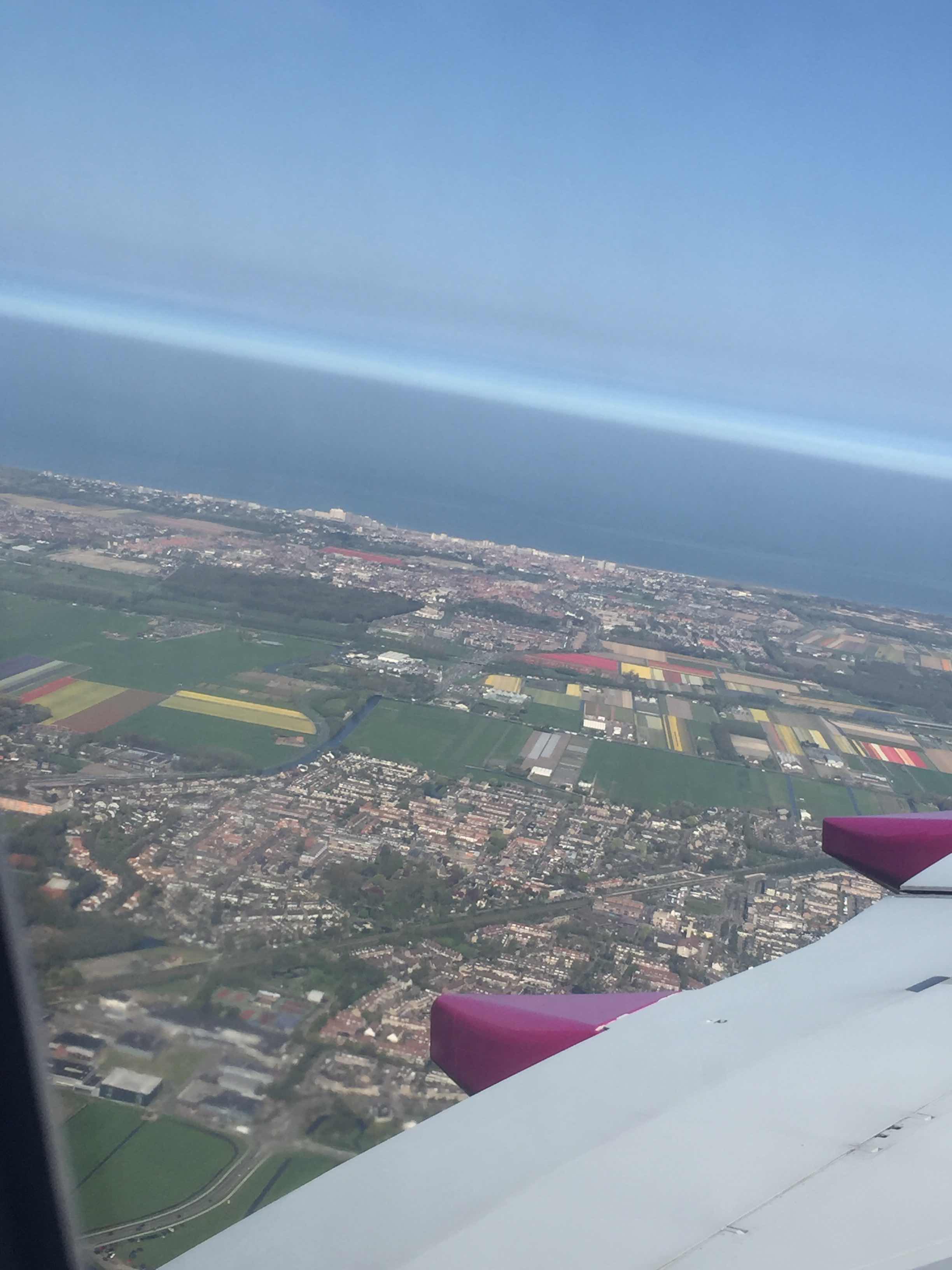 It was my KLM flight between Amsterdam and Frankfurt that caused the wrinkle. When I originally purchased this flight in Canada I called the airline on two occasions to confirm that one checked bag was included in the price. Before I left for the airport in Canada, I checked in and it said I had no checked bags and would have to pay. I called the airline and a KLM employee put me on hold for five minutes while he checked. Sure enough when he dug deeper, he said that “yes my bag is included and although it said I had to pay for my bag, when I check in at Amsterdam they will not charge me extra”.

Fortunately I had a six hour layover in Amsterdam because they did say I needed to pay extra for my bag. I went to the desk and when the supervisor looked into it, she found that there was a glitch in the system and my bag was included. They made a note in my file so hopefully I won’t have the same problem when I return to Amsterdam...but I fully expect to.

I slept through that short flight as well, (except when they delivered the snack).

The weather in Frankfurt was 27°C and sunny. I felt a tad hot in my black knit turtleneck.

I took a train from the airport to Heidelberg where Graham was waiting for me.

It was a nice 25 minute walk to Graham’s student apartment in the old town. His room was very clean and tidy with freshly washed sheets. Unfortunately they had just run out of toilet paper in the bathroom so he helpfully handed me some newspaper under the door. Note to self: purchase toilet paper . 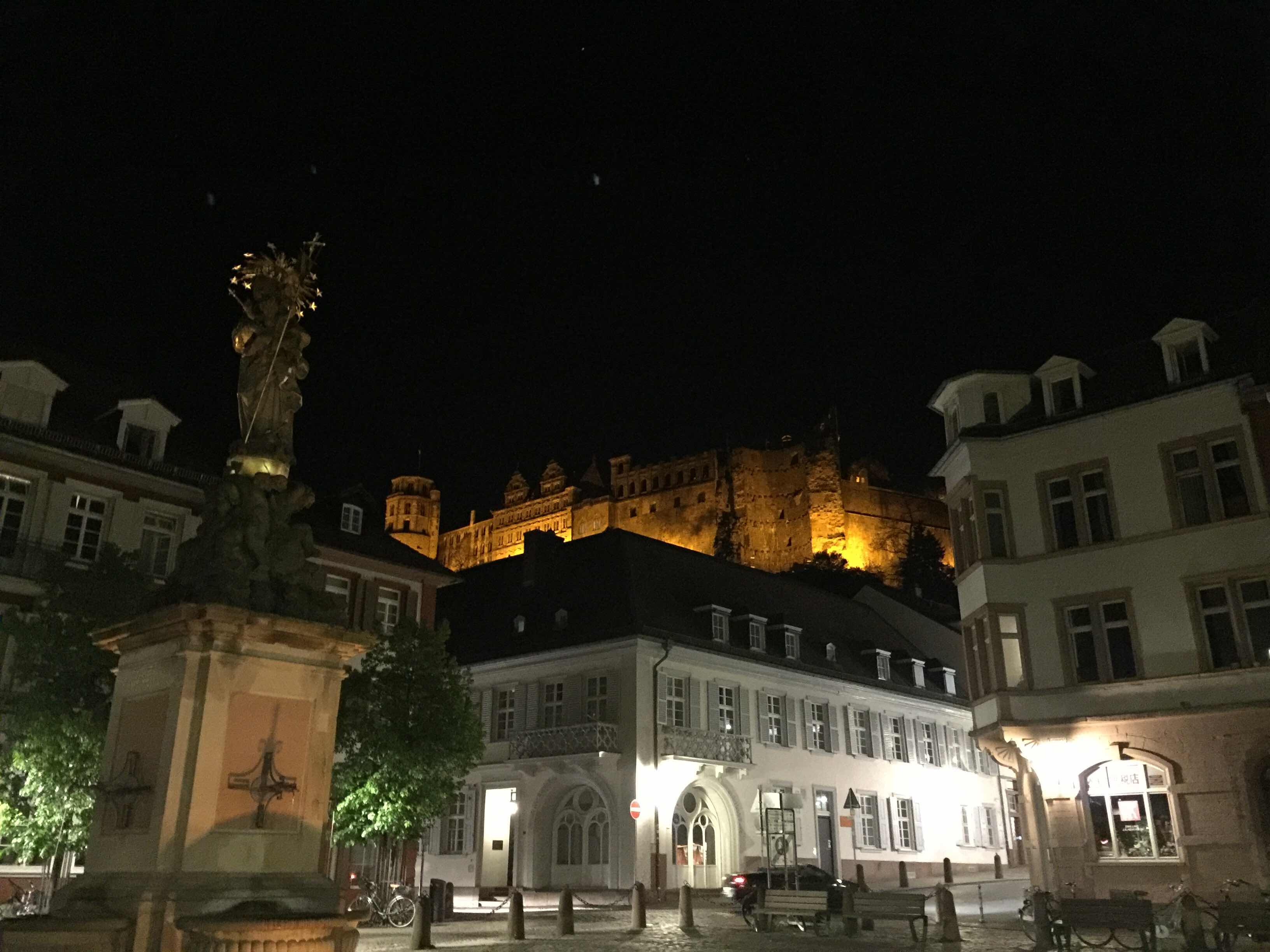 We headed out for supper. The picturesque streets were alive with Saturday night revellers. The outdoor cafes were brimming with people. Graham treated me to supper at his favourite Kebab and Pizza place. He ordered his favourite dönar kebab pizza. It was surprisingly delicious.

Heidelberg is located in a valley between two small mountains.

After walking through a few of the gorgeous old squares, we visited the old bridge to check out the view of the lit up castle on the mountain before heading back. 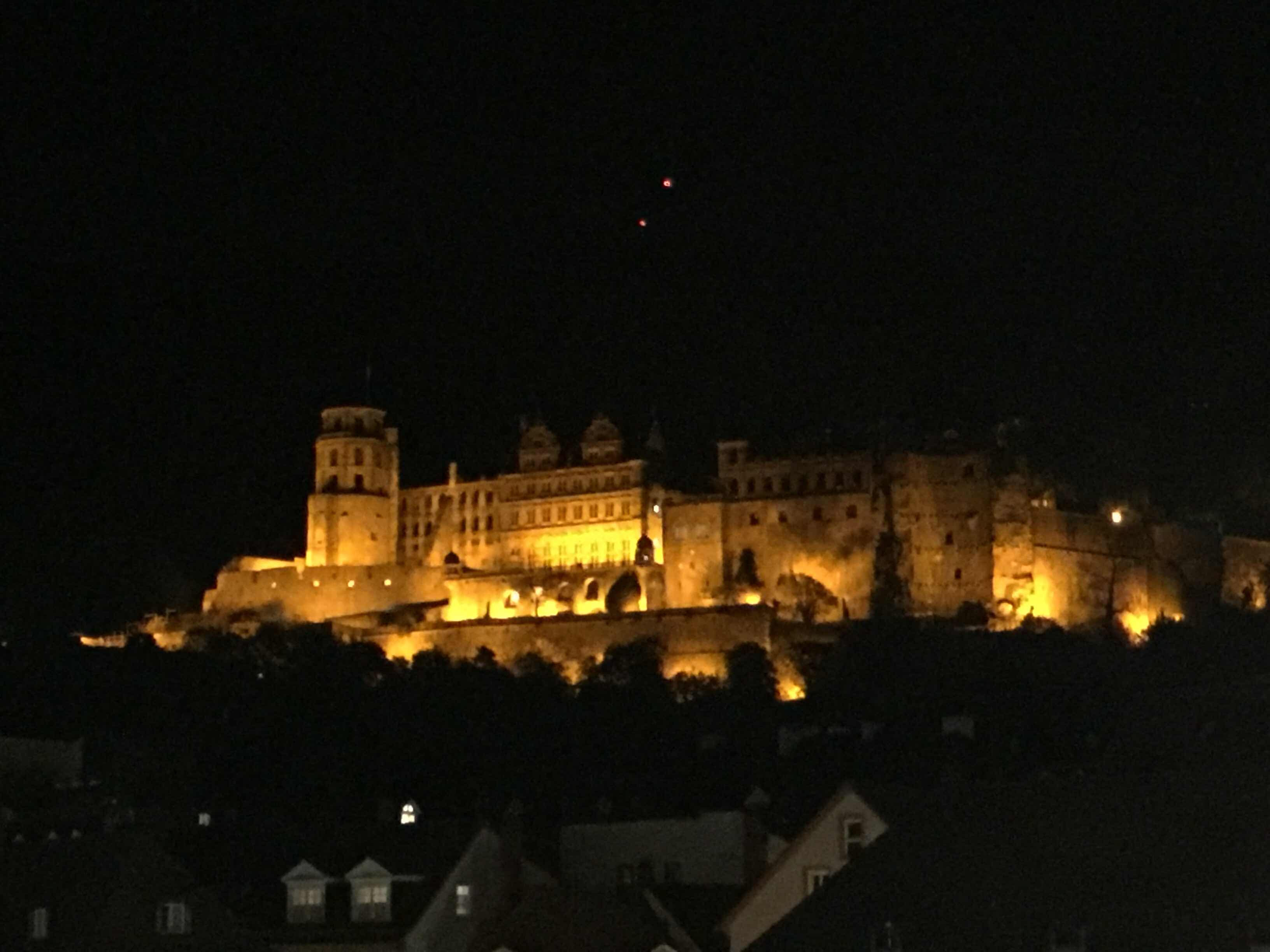 Graham’s apartment is on a small alley off the main old town street. His room is street level so it was easy to hear partiers until the early hours of the morning.