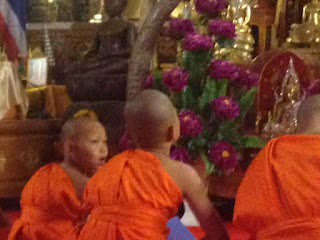 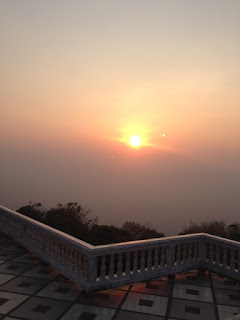 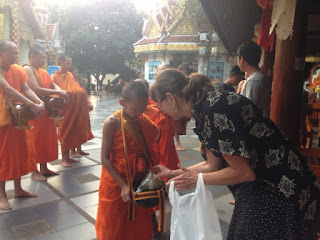 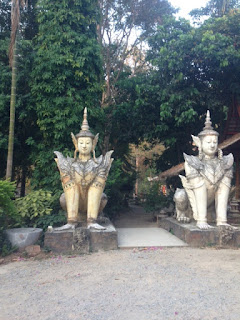 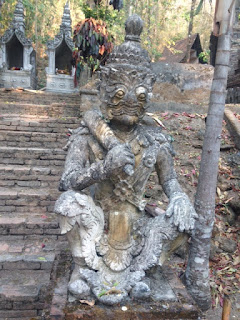 We rose at 4:30am. Our hostess had given us our breakfast the night before so all we had to do was heat it in the lobby's microwave.

We were picked up at 5:00am by Sipohn from www.untouchedthailand.com and drove for about 40 minutes up a mountain.

As we drove we could see the lights of Chiang Mai far below us. All was still dark when we arrived. We then walked up over 300 steps to Wat Doi Suthep.

My stomach was a bit upset so Sipohn pointed me towards the washrooms. Without closely looking at the sign,  I ran in to one, startling a number of young monks. They were kind enough to direct me to the women's washroom next door. I was glad I carried toilet paper in my purse. Often toilet paper in public washrooms is left outside the individual stalls which can be a problem if you don't realize this until after doing your business in the stall.

We were so delighted to have this tour with Sipohn. John and I were the only ones on the tour and we learned so much from Sipohn who used to be a meditating monk...he also knew all of the other monks. He explained the meanings of many statues, architectural elements, Buddhist concepts and what the day to day life of a monk consists of.

The oldest monk at this temple was 86 and the youngest one 10. We went into a building where older monks chanted and the novice child monks were supposed to be meditating or following in their books. True to nature, most of the young boys were fidgeting and two were poking at each other.

We watched the dawn from a terrace at the top of the Wat. It was wonderful.

We ran into Lisa and Holly from yesterday's elephant tour. They rented a motor scooter to get up the mountains narrow, windy road. Sipohn cautioned them that it was more dangerous d down the mountain and to be very careful on the way down.

We next went to some seats where we waited until the monks came. They were in a single file line each holding a bowl for alms. John and I put one food alm in each of their bowls as they passed.

The monks next stood in front of us and chanted a blessing. During the chant, two of the dogs who lived at the temple came between  the monks and started growling at each other. Their anger increased and the growls at became increasingly threatening. Fortunately the blessing ended and the monks forced them apart.

Following the monks out of the Wat, down the long staircase with the serpent railing, we took some pictures with them and two costumed young girls from a nearby village.

Halfway down the mountain we stopped at an ancient temple called Wat Pha Lad. We drove through the gates and past a monk who was cleaning leaves with his leaf blower. This used to be Sipohn's temple when he was a monk. Besides the monks, we were the only people there. It was so peaceful.

I was still feeling weak with my tummy issues but was determined not to miss anything, so we continued on to Wat Umong which had an ancient tunnel. We fed the the catfish and admired the chickens, roosters and chicks.

Our last temple stop was Wat Sri Suphan, which is known for having the only silver sanctuary. We watched monks and workers mold and design silver pieces.

We rested for awhile after being dropped off at our hotel because I was still feeling a bit off.

The late morning and early afternoon was spent wandering around the streets and checking out some of the 300 temples of Old Chiang Mai. We stopped for drinks (non-alcoholic) often, including at a cafe in a beautiful park. On our way back to our hotel we bumped into Luca from Italy who we met on our tour in Bangkok. Small world.

After a rest and a shower it was off to a restaurant on the Mai Ping River for drinks while watching the sunset. Some type of eel kept bobbing his head up near at the edge of the river.

Once it was dark we ended the day by visiting the Night Market located outside the wall to the to east of Old Town. John stopped for Pad Thai and I feasted on plain rice cause (you guessed it) my stomach was still not right. We explored the market stalls that had all kinds of merchandise and clothing. We saw many Ladyboys advertising their burlesque show. They were stunningly gorgeous and I would have never guessed they were men.

Exhausted, we grabbed a tuk tuk and headed back to the hotel for the the night.

I probably won't be blogging for the next few days because we are going into the Lake District and jungle and I'm not sure if there will be Internet or not.
Posted by Kimberly at 10:44 AM