I finally slept like a log and woke to a chorus of melodic birdsong...and John brushing his teeth.

Our breakfast was beautifully presented with John's rice sculpted into a dolphin shape and mine a flower.

A truck showed up at 8am and we got into the back. After picking up a few others, our party consisted of a couple from Paris, three other people from Toronto, one from Montreal and two from Germany. After awhile in the truck we discovered that two of the women, Celine and Lisa, knew John from work. What are the chances of that?

The last of the road was uphill and windy. Marie from France was feeling very nauseated. I felt a bit queasy as well. Luckily we arrived before anyone lost their stomach.

I researched the Elephant Jungle Sanctuary before we booked. This place is very humane and only allows interactions with the elephants that are natural behavior such as eating and bathing. Their goal is to protect and take care of these animals. Many so called sanctuaries in Thailand force the elephants into doing unnatural behaviors,  such as painting pictures and giving rides, by cutting them with hook knives. Believe it or not, unlike horses, elephants backs are easily damaged by people riding on them. Therefore it's important to support the good sanctuaries. 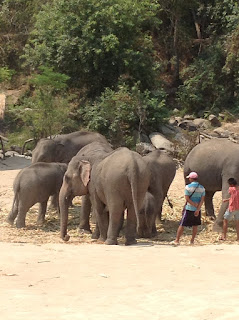 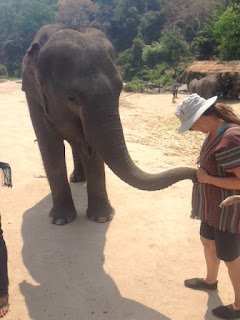 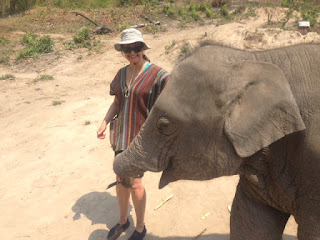 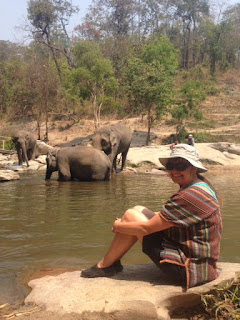 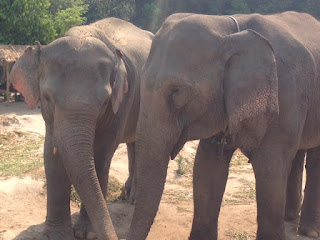 This whole day was an awesome experience. These elephants are not fenced in and seem very happy. They love to be petted.

Our first interaction was to feed them bananas and sugar cane. They would even try to go into our pockets to get more. It was amazing to be petting these gentle giants while looking into their eye...it was a little difficult to look into both eyes at once.

There was a baby in the herd who was quite mischievous and a little clumsy. A real hoot to watch. He accidentally kicked John a bit in the ankle but it didn't hurt him too much because John was in the process of moving his foot away when it happened.

It was hilarious to see all the elephants amble after one of the handlers that was dragging out a huge bundle of corn stocks. It was just like goldfish gathering to a spot where food has been dropped in.

After a delicious Thai buffet lunch we changed into our bathing suits and fed the elephants the leftover pineapple and watermelon rinds. As with the African elephants, the Asian elephants spend over 18 hours a day eating vegetation. Let's just say, they eat a lot.

Then came bath time. They walked the elephants into a big pond and we joined them. We put mud on them and rubbed their skin. There was a fair bit of throwing mud at each other. At one point one of the handlers pointed one of the elephants trunks at us as she blew out water. Both elephants and humans were covered in water.

The elephants were next brought to a stream where they laid down and we poured bowls of water on them (and each other). We also rinsed ourselves off in the stream or the outside shower.

Too soon it was time to head back. We stopped at a roadside bathroom and store. I went into the ladies washroom and it was a crouch one. Not being a flexible person, I decided to hold on until I got back.

After showering the rest of the elephant muck off our bodies we went to a massage  place next door to our B&B for a one hour oil massage. Can you believe it was only $12 Canadian each. It was awesome and now both John and I smell like jasmine oil.

Relaxed from our massage, we headed over to the huge area of blocks of street food vendors. During the day there is no one there but at night it suddenly blooms into blocks and blocks of tables and street food vendors. Both local Thai and tourists were eating there. We had a plates of crispy pork and fried kale, another plate of grilled squid, a plate of pad thai  and two beers (each the size of a wine bottle) all incredibly delicious (maybe even better than the restaurants we were at) and it all cost under $20 Canadian.

We bumped into Celine from John's work again. What can I say? It's a popular place.

With elephants, amazing food, cheap beer, gorgeous temples  and regular massages what's not to love about Thailand? I definitely want to come back.
Posted by Kimberly at 11:28 AM