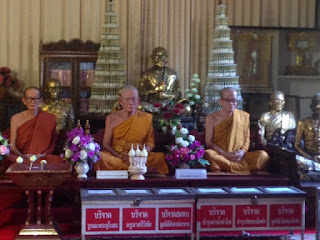 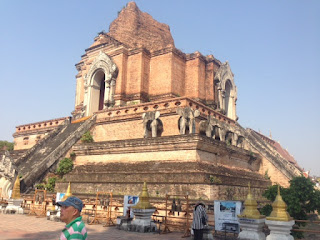 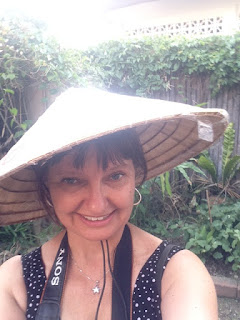 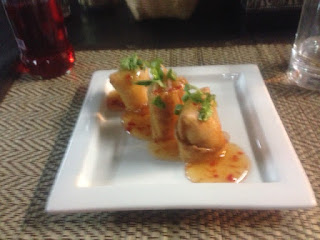 We rose early and had breakfast at our favourite breakfast place. Our hostess took our picture again. She says that that is how her boss keeps track of how many and what kind of customers they have.

We took a cab to the airport at 7:00am, which gave us plenty of time to catch our 10:30am plane to Chiang Mai while travelling during rush hour.

Flights within Thailand are very cheap. We paid $40 Canadian to fly from Bangkok to Chiang Mai (flight time one hour and ten minutes).

John and I were not seated together on the flight and I dozed off. I guess I was still partially dreaming when the flight attendant was trying to get someone's attention near by, I thought it was the man sleeping beside me so with my eyes still closed I forcefully poked the stranger next to me....he seemed a bit startled. How embarrassing. Thank goodness I will probably never see him again...(he was probably thinking the same thing).

We grabbed a cab and headed to our small hotel on the edge of The Old Town.

Our hotel, Amaka Cafe Bed and Breakfast was spotless. There were three flights of stairs to bring our luggage up but our room is delightful with crisp white sheets, a very new bathroom and all kinds of other conveniences. There was a huge selection of menu items to choose from for the next day's breakfast.

I saw some brochures for cooking classes and begged John to do one with me in the evening. He happily agreed and we booked it for 5 pm.

After a quick clean up and change of clothes we headed out to explore the Old Town which is a maze of small streets. We had a map but most of the time couldn't find any street names. After attempting the map, I finally asked directions.

We then found the statue of the Three Kings...not the ones that visited baby Jesus but three famous other Kings from the Thailand.

We went on to visit a small but beautiful black and gold temple. I cannot begin to tell you how many temples (called Wats)  are here....practically one for every block or two and they each have their own characteristics.

There were many monks at Wat Chedi Luang and an area where you could go talk to  monks and ask them questions. Some monks were sitting there patient and serene as some North American guy was trying to convert them to Christianity.

There was an ancient stupa (like a large brick mountain) adorned with elephant figures and housing Buddas in the top. Beautiful.

We grabbed some juices that we have never hear of from a street vendor and walked to Wat Pra Sing ( Temple of the Lion Buddha), which contained many lovely temples. Monks were meditating in a few of the temples. They were so still that John thought they were statues.

We grabbed a tuk tuk to our evening cooking class at  Asia Scenic Thai Cooking School. We were put together with nine other people, together our group came from Canada, USA, Germany, Israel and Equador. Under the guidance of our adorable and funny tutor, Juno, our group really melded.

Returning to the school, he walked us through all the steps as we each cooked up five Thai culinary creations. We all made spring rolls as well as a curry from scratch, a curry dish, a soup and a stir fry dish. I made Pad Thai, coconut milk soup, parang curry paste and a panang curry while  John made Cashew nut with  chicken, Tom Sab soup, Khaw Soi CurryPaste for Khaw Soi.

The group had a lot of laughs while we learned about Thai Cooking and my husband really enjoyed himself as well. We each even got to take home a customized cook book of all the recipes the group learned about and were even driven back to our hotels. This was an awesome evening.

I am finding the Internet a little slow so I will add pictures to this post when I can find some quicker Internet.
Posted by Kimberly at 12:42 PM