Royal Caribbean Allure of the Seas 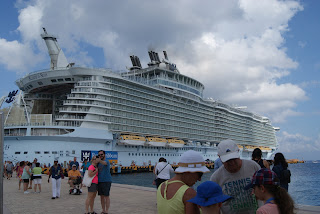 We are now floating along somewhere in the Caribbean.

The day before we left, while I was bending down, my dog Molly jumped up and banged me full force in the nose. I was positive I felt it crack. After all the maintenance I did on myself for this cruise, a broken nose and two black eyes would not be a good look. I was relieved to see that my nose wasn't swollen or my eyes blackened.

Our Niagara, USA to Fort Lauderdale flight was delayed and didn't leave till 4:10am and arrived in Florida shortly before 7am. Needless to say, we didn't get a lot of sleep.

We rented a car and spent the morning picking up some wine and pop before driving to Fort Lauderdale beach for a walk. It was in the 80s and sunny.

After dropping off the car we boarded the Royal Caribbean Allure of the Seas; the worlds second largest operating cruise ship which accommodates 5,400people at double capacity with a maximum of 6,496 passengers. It has 16 decks, a couple of rock climbing walls, a couple flow riders ( surfing pools), a zip line, mini putt, basketball court and an ice rink. Not to mention a Central Park replica that makes you feel like you are on land...they even pipe in bird song in the daytime and cricket song at night! You forget you are on a ship.

The spa area was nice but not as outstanding as the one we went to with mom on the Costa cruise. Probably for the best though, because I was told that saunas would make the glue for my mink eyelash extensions deteriorate quicker....and I had those extensions put on deliberately for this trip.

After exploring the ship and watching it leave port, we took much needed naps before heading to an 8pm supper. The food was fine, nothing outstanding but still good.

We kept ourselves awake in order to make our reservation for the Ocean Aria water show. I cannot believe the height the divers were jumping from...the pool underneath must be very deep. The acrobatics were amazing.

Yesterday was a day at sea. I was up at 7am for the morning stretch class which was followed by the abs class. My abs are rather tender today. After a buffet breakfast in the Windjammer marketplace , we payed claim to our lounge chairs in the adult only solarium on the sun deck. I checked out a talk on detoxing in the spa and joined John for lunch at the Windjammer again.

In the afternoon we had reserved tickets to the Broadway musical, Mama Mia. This was the third company I've seen perform it and I think it was the best.

After showering and changing ( it was formal night), we had reserved tickets to the ice show. I am so impressed with the quality of the entertainment on this ship.

We were 20 minutes late for our supper but all was good. We are not sharing a table with anyone but our own family. They are preparing Grahams meals separately because of his allergies.

We had reservations for the midnight stand up comedy show but I was so tired that Graham, John and I stood in the standby line for the 10:30 show. We got in. It was hilarious but part way through I started to doze off....John kept nudging me because we didn't want the comedian to notice and use it as material for his program.

We called it a night after the show.
Posted by Kimberly at 4:26 PM