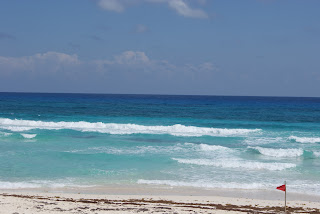 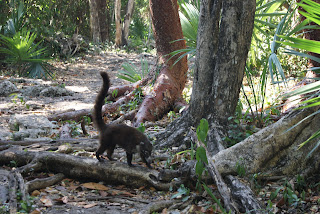 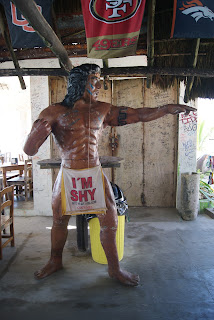 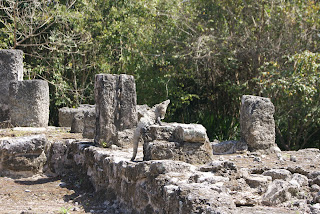 We slept in till 8am. I was sore from my abs workout the day before.

The ship was already docked in Cozumel.. The last time I was here, I was with Mom.

On board, John and I went to the Windjammer for breakfast and then had a leisurely game of mini putt before checking on our boys. Shockingly, they were ready to go on shore.

We rented a car and explored the island. It's not a large island and only takes about  an hour without stopping to circumnavigate.

We stopped at the small town of El Cedral to check out some very small ruins before driving to the other side of the island.

This part of the island was much less touristed, not built up and had a crashing surf of waters that ranged in colours from a fresh aqua marine to vibrant turquoise to cobalt blue ending with a royal blue on the horizon. I have never seen such beautifully shaded water. This will be the picture in my mind if I ever decide to meditate.

We stopped at a surfside local restaurant that was pricier than I expected, but that was ok cause the view was worth it. John, Graham and I each had a beer but Cameron had a fancy drink that came in a humongous glass. I tasted it, it was quite weak. The food was mediocre, but the view.......

There was a large statue of a Mayan warrior in the restaurant. Someone had put a BBQ apron over his privates. I walked closer to read the inscription . It said " I'm shy but I have a big dick".  Suddenly the apron flies up and a big schlong bolts out. I screeched in surprise to the delight of a group of locals who were laughing it up at the bar. It was only then that I noticed the almost invisible fishing line attached to the hem of the apron. I have no doubt that the guys at the bar held the other end. With the curtain call over, the apron once again closed, covering its surprise for the next unsuspecting tourist.

We next stopped to walk along St Martin beach. The sand was fine and colored the lightest shade of beige, a perfect foil for the gorgeous colours of the ocean.

The weather was incredibly hot.

Once again in the car, our explorations lead us to the larger ruins of San Gervasio. They were neat, not any where as extensive as Tulum or Chichen Itza but still very cool.

The iguanas hung around the ruins like dogs basking in the sun. We also saw some Coati, which are like raccoons but with long pointy noses.

We are now back on the ship, waiting to cast off to our next destination. It was a pretty low key evening because we were pooped from our day.
Posted by Kimberly at 8:53 AM