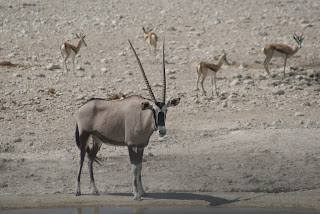 I heard hyenas and jackals calling in the night. At first I thought it was someone on another campsite with very loud children.

We leave Etosha National park at 7:00am.

We stop in Okahanja for lunch and to check out the craft market. Now this is an exercise in negotiation. I saw a batik which they said was 600 Namibian dollars. I had already bought one the same size for 200 rand ( which is equal to Namiban dollars) and I said I would pay no more than 200. They said 300. I started walking away. They said 250... I continued walking. He said let me ask my mother and then (without asking) ran over and said I could have it for 200. I also bought a beaded warthog and little rhino bowl.

Annet purchases a huge wooden giraffe and Jolanda gets some large wooden bowls. I would love to get things like that but have hardly any room in my luggage so can only buy small things.

Graham came over to show a bowl that he agreed to pay 120 Namibian dollars for but everyone said he was paying too much so he went back and negotiated it down to 70. As we were leaving, a guy comes and offers him a second similar bowl for 30.

We ate egg salad sandwiches at the picnic area and are now on our way to Windhoek where we will be staying in a hotel.Windoek is a larger German influenced city.

We stop for an hour in town. We have a choice of going to the museum or shopping. I'm embarrassed to say, We go  shopping; Shawn needed shorts and I wanted bio Oil ( great for stretch marks and aging skin).

A funny thing happened the other day that now keeps popping up in our conversations. A bunch of us were all sitting around having a beer and Frank (20 years old), pulls up a picture on his phone of about 10 pretty girls that are all dressed up and says " What do you think of the girl in the bottom left hand corner?"  Iauen ( from Wales) questions "The one with the big boobs?". Frank replies "That's my sister."

After checking into our hotel and hand washing some clothes we meet everyone at reception where Gift had organized a couple big van cabs to take us  to Joes Beerhouse for supper. It was really good..but huge portions. Lots of game meat was offered on the menu.