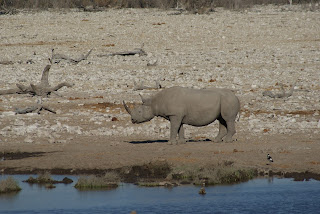 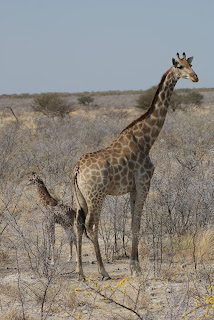 After hanging out at the watering hole and trying to deal with things on Internet and skype ( which keeps lagging), I finish my beer and go back to the campsite for another delicious supper of springbok, potatoes and peas. Gift made a fabulous birthday cake for Felix and Evi at the truck....that man can do miracles.

I fall asleep quickly and only wake a few times to the sounds of barking dogs, unidentifiable animal sounds and a psychotic chicken.

We leave early for Etosha National Park where we will do some safaris.

Entering the park we stop to take pictures of Springbok, Oryx, Kudus, an eagle, giraffe and elephant family. We also stop for facilities and water.

I fear we are becoming spoilt. In the beginning someone calls out Giraffe ( who happens to be half a km away) and we stop the truck and take pictures for a good ten minutes. Now we only shoot if animals are right in front of us.

The watering holes are the best places for spotting animals.

Our first water hole has zebras, oryx, springbok,ostrich and wildebeests all coexisting in perfect harmony.

Our second watering hole at first only has springbok and oryx. All is calm until a black backed jackal slinks onto the scene; ears prick up, all eyes are on the intruder. A herd of springbok bound out of his way. He goes to the edge and drinks.

In a distance another jackal makes his way towards the hole. As he gets closer, the oryx chase him to the other side of the hole. Things settle but all eyes continue watching the jackals as we drive off.

Along our route, giraffe heads pop out from the scrub like dandelions in springtime.

We spot a bird and ask Gift what it's called. Gift seems a bit bashful at first and says " It's a Kori Bustard....and I'm only going to say the name once."

We can see mini dust tornados from time to time.

A call goes out, "elephants on right, giraffes on left".

We stop at the campground for lunch. Gift suggests we check out the water hole while they prepare lunch. He says there probably won't be many animals there but it's worth a look.

There was a herd of over twenty elephants there; mothers, youngsters, babies and a few large males. Pure magic.

We watch them sand bathe, drink and just hang out. Soon, as if on cue, all the females and children line up and exit, leaving just the ever present springbok. In a minute the elephants are replaced by a herd of zebra. They are so close.

After our lunch of grilled cheese sandwiches and coleslaw, we continue our game drive.

We see all the animals from earlier in the day as well as a cape fox. We go to another water hole where we see a rhino. He moves into the perfect position, I click the picture.

There is a rather pungent aroma coming from the watering hole. I suspect the elephants.

We set up in our campsite which has a swimming pool, camp store, restaurant and showers.

At sunset we check out the camp water hole. A lone rhino is the entertainment. He drinks and wanders off.

After supper we head to the watering hole again. It is dimly lit which creates a dreamlike atmosphere.We wait in hushed anticipation. . A little animal that I can't identify shows up for a drink. Then come the elephants.

It's amazing how quiet such large beasts can be. They line up at water's edge and dink with their trunks. One of them does something that bothers another and an indignant noise bellows into the air before peace settles again.

A large black rhino followed by a baby materialize at water's edge.

Suddenly the herd is alert. A mother elephant with baby in tow, leave the scene. The other elephants band closer together. I don't notice any change in the rhinos. A lone hyena shows up at the opposite side of the waterhole to drink...the elephants slowly make their exit in a stately line with only the largest male remaining. A few minutes later, even he leaves. The rhinos disappear back into the scrubby bush and all is quiet.

We leave for our morning game drive at 6:30. Our goal is to spot some large cats.

Brenda jostles us on the unpaved roads, in the process loosening articles in the over head compartments. One of my Mephisto sandals fall out and hit me on the head.

The first watering hole we check is empty except for a few ducks. Fabio is our best spotter but even he cannot find anything. I spot a lone jackal trotting close by. Finally four zebra show up. Where is everybody this morning? We move on.

A helicopter flies overhead searching for rhino poachers. It hovers, low to the ground in the distance.

We visit the salt flats which are barren as far as the eye can see, except for numerous piles of deification in a variety of sizes.

We see zebras, hartebeest, springbok, kudu, oryx, wildebeest,giraffe, rhinos, bustards, hornbills, ostrich, Eagles and more, but none of the cat species are found.

At one point we count well over 30 elephants at the watering hole, with over ten more coming. Gift tells us that elephants have something in common with people...they mourn when one of their herd dies.

Alfons stops to speak to one of the other guides. They inform him that there are a pair of lions up ahead. We find them sleeping under a tree. There is not much movement.They finally put up their heads and look around before going back to sleep.

We spot some warthogs in the distance.Shortly after, we find another lion sleeping at the water tanks.

We head to our campsite for lunch and I hand wash a few items so they can dry in the hot sun.

We are given a choice to hang out at the pool and campsite or go on a game drive. Only Fabio, Federica, Jessica, Shawn and I choose the game drive. We see many of the same animals and a mostly eaten giraffe carcass. The lions are still sleeping in the area where we saw them earlier. Fabio coughs loudly and clears his throat but they don't budge.

The sun is going down in a big orange ball. We head back to camp. Time to shower and get ready for tonight's water hole antics.