Charleston: the Drive, the Accomodations, the Shopping 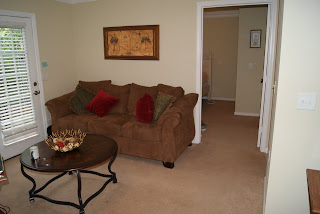 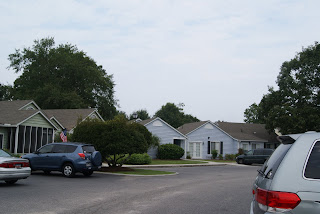 The Drive
We began our trip to South Carolina at 11:30pm Friday night because we had to check into our Charleston accommodations by Saturday evening.

My husband had napped so he was well rested for the first shift. I had no problem sleeping in the car until he woke me at 3:30am in Pennsylvania to take over the driving.

I found the driving a little stressful because it was so dark but things improved considerably when he pointed out that my headlights weren’t on…Luckily, I hadn’t left the parking lot yet.

There was hardly any traffic but a lot of curves in the road which made it a tad disconcerting in the darkness.

We continued to trade off driving shifts, (ok, he did most of the driving). We travelled through West Virginia, Virginia, North Carolina and South Carolina, only stopping to fill up on gas and go for breakfast at McDonalds. We finally arrived to our accommodations in Mount Pleasant (Charleston) after 18 hours.

TIP: Before leaving, we filled an extra portable gas tank, just in case we ran low in the middle of the night or in an area without gas stations.

We were delighted with our accommodations. Although this place is in Mount Pleasant, it’s only a 10 minute drive over the bridge into the heart of Charleston.

At $560 a week, Sandpiper Village is a great value. Although it’s a retirement residence, younger people can rent for a week or two. The two bedroom units are clean and spacious consisting of bedrooms with a livingroom and kitchen in between. Each bedroom has its own bathroom and all cottages have WIFI but no telephones. Units are outfitted with a number of small touches (railings, larger doors etc) perfect for seniors. There is also a recreation area with a swimming pool.

The residents are very friendly as is the staff.

We found this place on Homeaway.com but it’s also listed on vrbo.com. We would happily stay here again. The resort contact is Beth Jacobs at (843)884-5735.

Even after checking out Tanger Outlet Mall, I’m not seeing the cross-border deals that I used to see. Prices are pretty well the same as when I shop the outlet malls in Ontario. The main thing that I found a difference in is books. Despite the fact that the Canadian dollar is higher than the US dollar, prices listed on books are still generally more expensive in Canada.

Where shopping gets interesting is at stores not available in Canada. I love Trader Joes. Besides having many of their own healthy food products, they also had a good selection of $2.99 bottles of Charles Shaw wine, (many choices of white and red). I’m not sure if this is fact or urban legend but I heard the story behind the low price is that in the divorce settlement between Trader Joe and his wife, she won the proceeds from his winery so he priced his wine as low as possible. Urban legend or not, the price is right and the wine is actually quite good.

Posted by Kimberly at 9:19 AM No comments: Links to this post 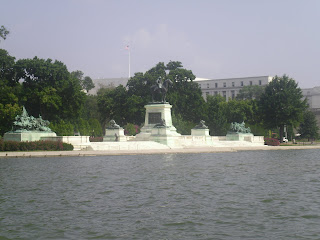 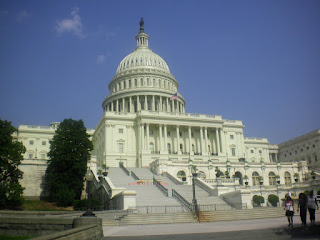 Tickets for the talks and museum are timed and free. If you want to skip the line-ups, go on line and purchase your timed ticket in advance. The cost is $3.50 per ticket.

The house where Lincoln was brought and died after the shooting is located across the street from the theatre.

We then walked to the Smithsonian Museum of Natural History. You know. The one that features prominently in “Night at the Museum”. There were so many great things to see and do there for both adults and kids. I personally enjoyed the gem display with the gorgeous Hope Diamond. The kids were more into the dinosaurs and early man exhibits. Once again, this museum was free.

Outside, the thermometer continued to rise, so on our way to the National Portrait Gallery, we stopped at McDonalds…not my favourite restaurant but it was cool, had free WIFI and cheap ice cream.

I enjoyed the portraits of the Presidents in the gallery. There was also a really touching room dedicated to President Reagan. The portrait of the real (not Disney), Pokahontas got everyone talking. And yes, this museum was also free.

After leaving the museum, we stopped for more feeding, watering, and bathroom breaks.
Drawn by a large number of Canadian flags, we stopped to check out the Canadian Embassy. Because of security measures, we couldn’t go in.

We walked to the Capital Building but couldn’t get in because it was 5pm. We did enjoy looking around the outside and checking out what I believe to be a Civil War Memorial.

Hot, tired but happy we made our way to Union Station for more snacks and returned to our B and B to freshen up and retrieve our luggage.

After a really delicious (and well-priced) meal at Mark’s Kitchen in Takoma, (recommended by our B and B host, Kyle), we returned to Union Station.
It was dark by this time and we were a tad behind schedule. We ended up taking a wrong turn and realized a few blocks down that we were heading in the wrong direction. After looking nervously at our watches, our panicked group broke out in a sprint in the correct direction, suitcases bouncing behind us.

We needn’t have worried. The bus was a few minutes late.

Our return Mega Bus trip was uneventful. My only gripe was that my seat wouldn’t stay reclined.

We had an amazing time and this trip was a real bargoon.

Would I do it again? You betcha!
Posted by Kimberly at 9:04 AM No comments: Links to this post