Mixing with Heroes in Budapest 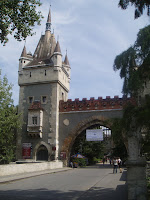 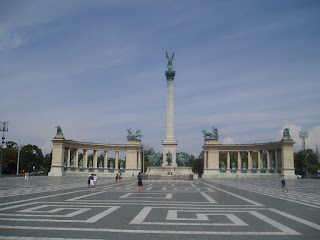 We should have booked a few more days in . As it stood, we had 3 ½ days, so we jam packed them with sight seeing.

Originally three cities, in 1873, Buda (west bank), (east bank) and Obuda merged to become . We stayed in Buda which is separated from by the .

Shortly after we moved into our rented apartment, we took the subway from Buda to . If you visit this city you should know that payment for transit is taken very seriously. There was no shortage of transit staff checking for violators. Fortunately the Scutt family is law abiding and had no issues.

Heading first to the (Varosliget), we enjoyed the greenery and walkways of this once royal hunting ground before grabbing a bite at a snack truck. (Having two boys, we stop often for snacks). To this day, I’m not certain exactly what I ate. It was an unknown substance coated with crumbs and fried to anonymity. After showing the vendor my son’s Hungarian allergy alert cards, the only thing confirmed was that the food in question didn’t contain or come in contact with any nuts or shellfish. Rather unappetizing on its own, large amounts of ketchup greatly improved this dish.

With full bellies we crossed the street to the impressive . The dominates the square with its fierce statues of the seven tribe leaders that founded Hungry, and numerous other important figures from the country’s history. This monument was started in 1896 for the millennium but not fully completed until 1929.

Across the road lay the . Unfortunately, it was too late in the afternoon to give this museum a visit. I had heard that it was fabulous and was disappointed to miss it.

A few blocks down was , a stunning replica of a Transylvanian style castle. It was built in 1896 for the millennium celebrations where it became so popular that it was later rebuilt with more permanent material. The castle hosts an agricultural museum. On the same grounds is another replica; a medieval church that is more impressive on the outside than inside. I was surprised to find out that (in ), used to be part of . Maybe that was why I kept seeing vampire book ads everywhere…or maybe it was just due to the popularity of ‘Twilight’.

After walking around all day in 90 degree weather, it was a perfect time to visit the Szechenyi Baths. See my earlier post.

Refreshed, we returned to the Buda side of the . On our way to a local restaurant we watched a woman in front of a small church, place fresh flowers into a vase held in the hands of a statue of Virgin Mary.

After dark, the temperature dropped to the mid 70’s. Walking back to the apartment, we admired the lights from the Parliament Buildings reflecting in the river. Simply magical!